On Tuesday February 18, Linden Lab's new CEO Ebbe Altberg, also known inworld as Ebbe Linden, met inworld with several Second Life bloggers. Pete Linden was also at the meeting. The bloggers were from left to right Saffia Widdershins. Daniel Voyager, Mal Burns (known as Aeonix Aeon in the past), Draxtor Despres, Inara Pey, and Jo Yardley. The meeting was a little more than an hour from 9:40 AM to 10:55AM SL time. Ebbe showed up as the robot avatar available to newcomers just starting out.

Most of the bloggers have already made their comments, Daniel Voyager (link), Inara Pey (link), Jo Yardley (link), and Mal Burns (link). Presumably Draxtor Despres will make his comments on his radio program later today (link). 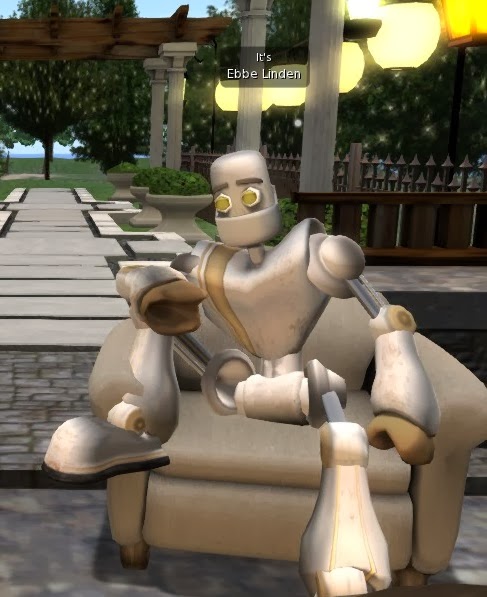 The meeting was a friendly one, with some minor disruptions reported due to some bugs. Jo Yardley wrote that Ebbe asked if this was normal. Questions (prepared ones) were asked, and Ebbe answered. Among the things discussed were the new user registration, of which Ebbe thought the one he went through was lacking and needed improvement. Of how it is now he stated he needed to know more before making a decision. He was interested in meeting up with the leaders of educational sims and communities. He also wanted to learn more about sports in Second Life. He felt Second Life was the beginning of something big, "I have a huge belief that Second Life is just the beginning of something that can be much, much, much bigger," and wanted it more accessible to users.

He stated people in Linden Lab were interested in bringing back the JIRA, and were looking for a way to do it. He had been a user of Second Life in its early days, as was his teenage son before he was booted due to his age and went to the Teen Grid. He understood that the mainstream media did not see Second Life like it used to, and Linden Lab had lost control of the image of itself it wanted to deliver to the masses.

The writers were overall impressed with Ebbe, and expressed cautious optimism about him. This included Mal Burns, whom has been quite critical of Linden Lab in the past, "... I do feel differently than I have about all other predecessors for a number of reasons. I get a different 'vibe' off of this guy. I’m almost willing to say that he 'gets it.' Almost ... " The biggest beef Mal had was the setup of the press meeting, eight writers each having been privately invited by the Lab. Mal thought this kind of arrangement was bad because it would encourage sucking-up among bloggers, and discourage asking hard questions and critical writing about problems about the Grid.

No one from Second Life Newser was at the meeting. Neither was Hamlet Au, Linden Lab's onetime imbedded reporter.

Daniel Voyager has a transcript of the meeting available on request, as well as a number of pictures on his  (Flickr).