Eye on the Blog: Fitted Mesh is Here


One longtime problem with mesh outfits was that they didn't always fit avatars quite right. There were attempts to fix the problem, such as the Mesh Deformer project. On Monday however, Linden Lab announced their solution to the problem, Fitted Mesh (also known as liquid mesh), was now part of the official Linden Viewer. 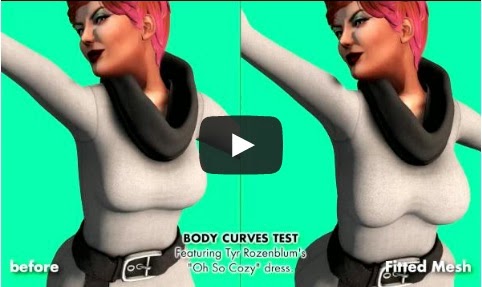 Today, we're happy to announce that Fitted Mesh is available in the main Second Life Viewer! As we've previously blogged, Fitted Mesh gives Second Life content creators the power to craft mesh garments that make avatars look their absolute best. We’d like to thank the vibrant community of creators for their thoughtful feedback and help testing this feature.

In the comments following the announcement, some were clearly happy, "Great news!" Others were less than enthusiastic, "So, none of the mesh templates that were bought before now will do any of this. Basically if the content creators re-rig their mesh we will have to start all over again. Too bad (there) wasn't a way to fix that." A thread on the update was started in the official forums, "Does this mean I don't have to look like a Barbie doll anymore?" with some posters asking questions about the technical details.

Iris Ophelia had a few things to say about Fitted Mesh (article). She felt it still had some flaws, "fitted mesh can and will break ... you may still have to adjust your shape to suit it accordingly; designers, on the other hand, still may not be able to rule out offering their mesh goods in multiple sizes." And for content creators, the update can be a real headache, due to "the current lack of instructional documentation to help designers wrap their heads around the changes." Shai Delacroix was quoted as saying Avastar software "has better documentation on Fitted Mesh than LL does." Still, "Fitted Mesh still fits. Even if it's not perfect, it's a step-forward, which is why Shai told me that she's hopeful about it in spite of the setbacks and the steep learning curve. No matter what way you look at it, that new dress now has a pretty good chance of fitting your shape, instead of you fitting yourself to it."

To see the Linden blog post in it's entirety, Click Here.
Posted by Bixyl Shuftan at 6:01 AM