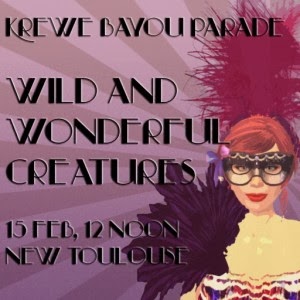 Tomorrow on Saturday February 15th,the New Orleans-themed sim of New Toulhouse will be starting up it's Carnival season with a parade.


Krewe Bayou will in the city this Saturday starting at 12:00 noon SLT. The theme of the parade, which will begin at the riverboat dock area, is “Wild and Wonderful Creatures,” and the public are invited to show up and second line—dancing umbrellas are available at the French Market stall—or just make merry, cheer on the krewe, and call for beads and other parade throws. Music will be provided by the Oh Lord What Is That marching band.

Chatting briefly with Nikita Weymann, she told me, "Carnival season began on Twelfth night, but this will be New Toulouse's first parade this year. There is another scheduled for Samedi Gras, Saturday 1 March." I asked what Samedi Gras was, and was told, "Mardi Gras is Fat Tuesday, 4rth of March this year. Samedi Gras is Fat Saturday, a better time for an event involving residents in widely different time zone. ... The idea is to have as much fun as possible!" So what should one expect, "Organized chaos, dogs and cats living together ... mass hysteria!"

The main event, Mardi Gras aka "Fat Tuesday" is on Match 4