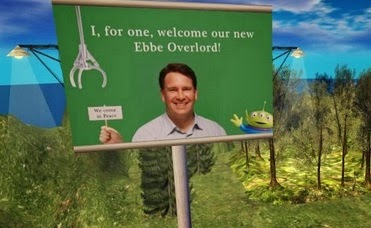 Recently in New World Notes, Hamlet Au had three suggestions for Linden Lab's new CEO Ebbe Altberg (link) in regards to Second Life. Two were excellent ones, that he go about in the Grid not as a Linden but a regular avatar, and that there should be more communication with the residents. But he made one that in my opinion would be a mistake.

... the existing userbase is never going away. .... So don't worry about them overly much ...  they'll basically be fine. (Yes, they'll keep complaining like crazy, and say horrible things about you and the company, but that's just their way of saying, "Baby, I can't live without you".)

Hamlet ended up getting a number of comments chastising him for that bit of advice, as Luskwood's Michi Lumin put it, "It's ludicrous to ignore the power of a happy userbase recruiting more users." And there have been times large numbers of people considered leaving the Grid, most recently last years two major changes to the terms of service. When third party Linden exchangers were shut down, many residents outside the United States seriously considered leaving. Even those able to use the official Lindex exchange didn't trust it. If the Lab hadn't backtracked, we could have, correction - would have, seen a sharp drop in the number of residents.

This is not a problem unique to Second Life. Businesses of all kinds strive to attract new customers from automobiles to soft drinks to radio stations. Once while yours truly was listening to one talk show, a host described his time as a disk jockey at another station during a staff meeting, in which the new guy in marketing suggested they stop playing the classic rock tunes they were currently playing and start with more modern pop. The DJ looked at him and commented that would make them loose their old audience while there would be no guarantee new listeners would arrive.

Unlike radio listeners, Second Life's residents have invested more than just time. They've made friends here. They've rented virtual land here. They've run businesses here. So change isn't as simple as turning a dial. But longtime residents, the oldbies, do have their limits. Even having friends here isn't a preventive measure as some communities, such as the Sunweaver/Angels, get together in games outside Second Life, even other virtual worlds.

Granted there are people whom see any change at all as bad. But this isn't the mindset of most longtime residents. And sometimes the reason for the complaint is a lack of confidence in Linden Lab due to it's history. Such confidence takes time to rebuild, and one way to further strain it is to ignore.

And even if a disgruntled resident stays, he won't necessarily keep on as he has. A few years ago, Linden Lab did an about-face to the owners of homestead sims, and suddenly many owners now had to pay a lot more money. Faced with what many called a "bait and switch," many instead chose to let their land go, even though they stayed. And so the total number of landholdings decreased. Even long after this controversy died down, residents less than happy with their Second Life experience are less likely to invest in it further with money purchases. They're also less likely to encourage people outside Second Life to come here. Word of mouth (or mouse) still remains how many new users find out about the Grid.

Ebbe has quite a challenge ahead. It isn't just to bring in new residents to Second Life while reassuring the older ones. It's also to encourage the oldbies to invest more here, more time, more money. A happy longtime resident population will help the Lab by spending more and encouraging friends to come to the Grid. But if the Lab decides they don't need to listen to them, the oldbies will respond by cutting back on spending, and for some deciding it's time to move on, continuing to meet up with best friends in other places.

Image Credit: Kirby Crow.
Posted by Bixyl Shuftan at 6:01 AM