For years, the Giant Snail Races have been a weekly event in Second Life. Organized by RacerX Gullwing, part sport and part entertainment, this is the sort of thing that could appear only in this virtual world. With the huge snail avatars stumbling across the obstacle course, or along a cross-country track, the wackiness of it all has been enough to keep a following of fans, both those who watch every week and those whom keep occasional tabs. 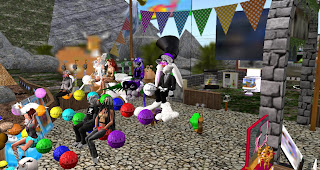 Week after week, month after month, year after year, the races have gone on. So imagine the surprise when RacerX made this announcement, both in the inworld group and his Facebook feed:

The Giant Snail races may on it's last few months. Were gonna lose our sim soon . Well still do some specialty races I suppose for RFL or special events but could be the end of our weekly shows.

We had a good run 11+ years. Thanks everyone for your support.

When I IMed RacerX, he told me he'd be able to speak more on the matter later. And indeed a few days later, he had a few things to say, "Looks like we may be around a while longer. Mae Best was paying for the whole sim herself. But if we can come up with most of the money, we'll be able to stick around. now just We had a few people so far say they would. but no specific amounts yet."

"Here's what she said on Facebook: Emretta May Hinman - 'We need sponsors to pay for the Sim Tier starting in Aug. Unfortunately due to budget cuts in the Govt., and poor numbers in my company, it looks like my job is going away, and I am no longer able to do it alone as I am taking a lesser paying job elsewhere. YOU can help by sponsoring a small $ or L amount each month towards Tier fees!"

RacerX went on, " so hopefully well get a few more people. We have room for advertisers on our scoreboard and would be happy to advertise goods or services during our show." He thought they would make it for now. The long term depends on getting enough sponsorship money.

The Snail Races are at 11:00 AM on Saturdays at Gullwing Coast Racers (142/104/777), aside special cross-counry races at the last Saturday at the end of each month from March to June for the Relay for Life.