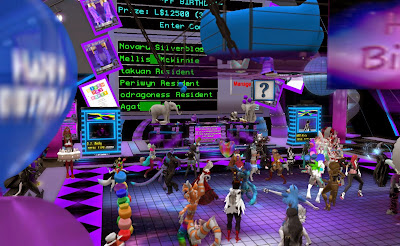 Sunday May 3 was the eighth anniversary party of the Furry Fashion Mall and Lounge. Store owner Amethyst Crystal had an extra large prize for the contest that night, in addition to a raffle and trivia prizes. There was also a joke contest, in which the notecard with the best joke would win. 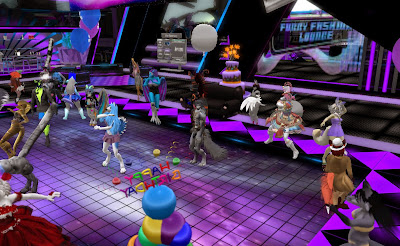 Wooo! It is Furry Fashions birthday party and we want you to come join us celebrate! We have everyone here and DJ Becky N rocking the house! Also - raffles ever 15 minutes! Trivia with prizes including giftcards and limited editions! A chance to win a free avatar from the den! 5,000L Prize on the board for your favorite or best outfit ! 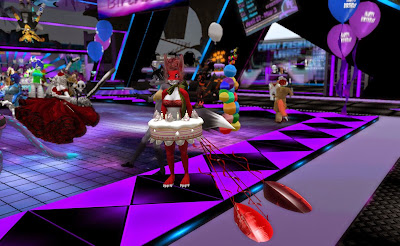 The board's prize was eventually jacked up to 18,000 Lindens, split between three lucky winners. First place of 9000 L went to Melanieelf (third picture), with Isunnyfox getting second and Moo Sauber getting third. The first prize of the humor contest went to Ikuto Moonshadow, with AislinP runner up.

*Addition* At first we misprinted it was the fourth anniversary party, but since learned it was actually the eighth! Congrats Furry Fashion.
Posted by Bixyl Shuftan at 6:02 AM