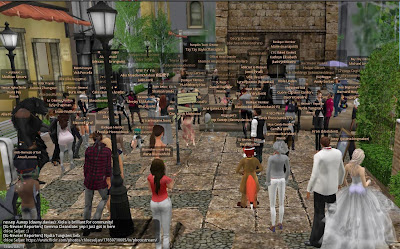 Last week, Thursday April 14, there was an "inworld meetup" where residents could meet up with and ask a number of Lindens questions. Yours truly only arrived at the tail end of it, and heard only a few questions on the SS Galaxy that went unanswered. Daniel Voyager posted that there were also questions about the SL12B and SL 2.0 (or Project Sansar as the Lab calls it). Inara Pey called it the largest turnout for a Linden meetup since they resumed.

The meetup took place in the Basilique sim, of which one of the rules had a number of residents complaining. More about this complaint later.