Tales From Podex: Piece of Cake 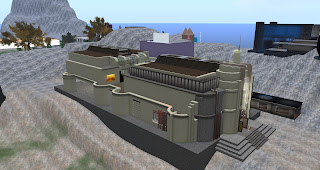 It was a fairly routine May day at the Podex Exchange. As usual, people were stopping by to get Linden dollars in trade for various global currencies. Their customers would sometimes mention what they intended to use for them. The spring was getting warmer, and the spring dates that were given as the reason for the Lindens were increasingly mixed with plans for heading to the beach with a new set of swimwear, surfboards, jet-skis, etc. And of course there was the Relay for Life, people getting Lindens to donate for their favorite team, or just the Relay in general. 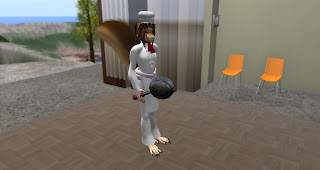 The staff were enjoying a chat in a moment between customers when someone walked in. He was dressed all in white with a red tie, and had a hat with a tube base and a floppy mass on the top. In his hand was a frying pan.

"Not really Sir. Just a few moments to fill out these forms. What currency will you be using in your transaction?"

"All right Sir, just please fill these out ..." 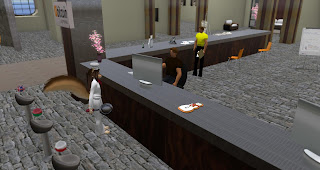 It wasn't long before the forms were done, and the money was exchanged.

"Fantastic. Now I can get what I need."

"So you're going to get some flour, sugar, oils, and other stuff?"

"What? If you're building something like that, why the chef's uniform?"

"I got this as I am among those working on the Second Life Birthday's Cake Stage." He grinned, "I thought it would be appropriate, considering the build."

The teller and the customer had a good laugh together, and the unusual builder went on his way.