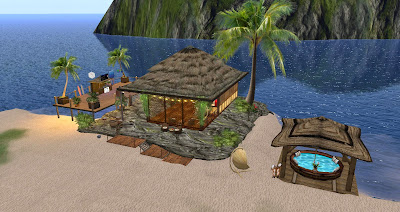 Good news for the fans of the Happy Vixen beach club, and beach club fans in general. Some additional land on Purrfection was recently rented out, and the new owner requested that the club, popular with the Sunweaver/Angels community in the past, be set up on the property. And it was. The first official event will be tomorrow at Noon SL time. Nydia Tungsten, the club's current manager, announced the club's return. 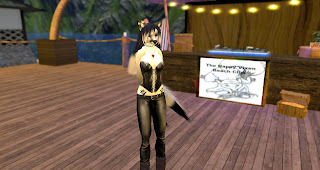 Thats Right "The Happy Vixen" is BACK and we are going to Kick things of THIS SUNDAY!
Music provided by yours truly, but we need more staff as well so contact me if you want to be part of a beach club either as staff or member.

The "Happy Vixen" club was build in response to the old "Raised Tail" beach club closing down (there is another Raised Tail club operating today, but with different owners and a much different theme). It's sometimes called "Angels' Beach," in memory of Nydia's Angels' group first club. Somewhat overshadowed by it's sister club, Club Zero Gravity, it operated weekends and Mondays while the space club had weekdays. The beach club has been the scene of fundraisers and impromptu pie fights. But due to financial reasons, the club was taken down along with Club Zero Gravity in August 2014.The club would be briefly reopened in the Sunny Beach sim in fall/winter 2014.

Now, it's open again, and the fun in the sun can resume.