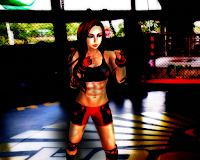 What comes to mind when you think of wrestling in Second Life? Some would be surprised to hear that there's any at all here. Others think it's just two girls catfighting in a match that quickly ends up without clothes and little more than a pornographic display. While the latter is around, there's much, much more to that when it comes to the wrestling ring in the grid. Avina Wyndham, a lady wrestler for the ACW, recently sent over a reader submission describing the different kinds of wrestling here, and a few different kinds of rings.

Read Avina's reader submission in Extra.
Posted by Bixyl Shuftan at 6:34 AM