It was a few days ago on May 5 that Linden Lab announced the code name of their next generation virtual world still in development: Project Sansar. There's been some conversation here and there about it, such as the SL Universe forums, and New World Notes. Hamlet Au didn't like the name, "Sansar seems like such a silly name. I'm personally inclined to keep calling it Second Life 2 for now." It did remind him of two things. One was the name of the largest mainland continent in Second Life: Sansara. The other was Philip Rosedale's original idea for Second Life's name, "Sensarra."

Strawberry Singh posted in Twitter that "Sansar" was an actual word, meaning "world" in Sanskrit. It was also brought up the name could easily be twisted around in mocking ways, such as "Sexar." Adeon Writer explained a couple other meanings, "Sanasr is Turkish for Ferret. It's also some term for reincarnation. So reincarnated ferrets. And since the most important question to ask in a virtual world is 'Can you be a ferret?' I think the name is perfect." 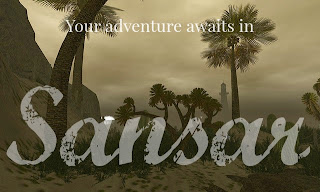 Canary Beck in contrast to Hamlet Au thought the name was a good one, giving "Ten Reasons Why Sansar Would Be A Good Name For The Successor to Second Life." As listed, "It's unique, the dot-com TLD looks easy to acquire, it's easy to type and pronounce, it's easy to remember, it's short, it feels right, it's protectable, it carries no baggage, it's a place, not a life, it's exotic and visually extendable."

With all these in mind, I keep going back to the Turkish meaning of the word, ferret, and have this mental image of the new world being populated by masses of ferret Tinies, all doing the "Riverdance."