It seems that the SS Galaxy won't be gone forever, but will be back. At least it will be in a limited manner. 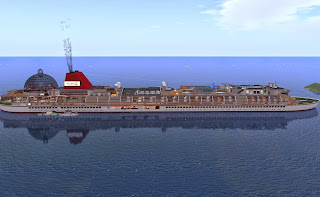 On the Galaxy blog, the ship's managing director DBDigital Epsilon posted some new information concerning the ship. Specifically that it will be back, but under a new owner. Linden Lab is taking ownership of the sims and the three sim ship. While fans of the ship will be glad to hear it's still around, the enthusiasm of some is likely to be dampened by that there are no plans for further events aboard the ship.

Dear Supporters and Friends of the SS Galaxy,

There have been many rumors cycling regarding the Galaxy and what really happened.  I can’t release that information as of yet.  However, I can now say that the SS Galaxy has been acquired by Linden Labs and will return.  She is currently undergoing retrofitting to sail under the Linden Labs flag.  I have been tirelessly converting all the transferable prims I personally owned to Linden Lab ownership, and my part of the project is now complete.

Sadly being under Linden Lab’s flag also means that none of the previous management or crew will be aboard in any sort of capacity.  I have also been told there will be no rentals or events.  This means she will not quite be the Galaxy you know and love.  But she will still exist in a museum state and be open for visitation in the near future.

More information will be released as I can.  I wish to thank everyone again from the guests, to the staff, and beyond.  You all made the Galaxy the special place she was, and no one can take that from us.

Further news will be posted as it is made available.
Posted by Bixyl Shuftan at 6:00 PM