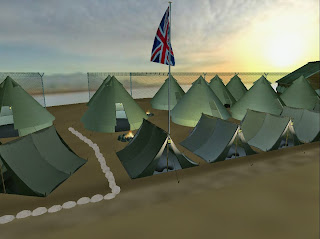 This site focuses on the First World War and how it was experienced by the British poets, soldiers, and nurses who served in it. The site has archived poetry, letters, interviews and photographs into an interactive exhibit.


At the point of arrival, the site requests that you change into one of its free uniforms, either a soldier or nurse, before you proceed into the encampment. I chose a nursés uniform for my tour. To enhance your viewing, it also gives directions on changing your sky to evoke the mood that existed near the front lines. This is easy to do and adds a lot to the experience.

The exhibit starts with a typical encampment of tents. As you walk through the sim, the sounds of marching soldiers and bugles can be heard. (Walk slowly because it takes time for the soldiers to rez.) When they do, you will hear interviews with the men who lived through that War. 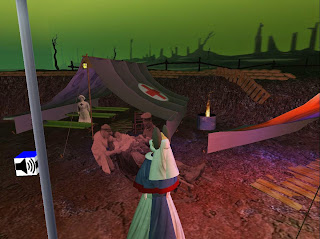 
In addition to the figures that rez, there are blue and red boxes scattered around the site. The red boxes are archived interviews, images and videos of the veterans. The blue boxes are readings of the poetry by Edward Thomas, Siegfried Sassoon, and others, accompanied by images of the poets and their manuscripts. There is a teleport to the hospital tents, trenches, and front lines. Near the rear of the site there is a transport that will give you an aerial view of the trench system, but I couldń't get this to work. However, I teleported easily to the hospital tents and trenches.

The interviews at the hospital were an interesting and sober reminder of the horros of  that war.  From here you can walk through the trenches to the front lines. Allow yourself time to go slowly through the trenches because many of the items are not initially visible.

Over five years later, the Western Front exhibit is still up at Frideswide (219, 199, 646). Grey Lupindo would be among the reporters founding Second Life Newser.
Posted by Bixyl Shuftan at 6:01 AM