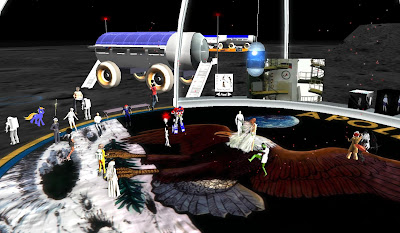 It was 46 years ago on July 20 1969 in which the Apollo Moon Landing took place. Celebrated by space fans across the world, Second Life was no exception, a party being held in the event's honor by the National Space Society's Second Life group. The party was held in the sim of the same name. 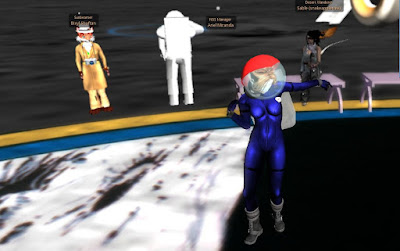 Celebrate the anniversary of the first humans from now until ‘one small step’ at 17:56:15 SL time at the party pavilion on our recreation of Tranquility Base.  We have dancing to a special Moon Music playlist, along with the discussion of the past present and future of space exploration and development (and how about that Pluto flyby, too?) 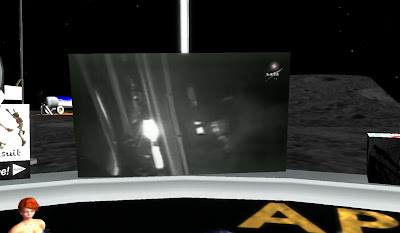 A number of avatars of all kinds, furs, robots, ponies, and of course a few alien-looking avatars joined the normal human ones in dancing and chatting at the pavilion.  There were a few space-related freebies one could get, such as a scruffy-looking "Hobo space suit." There was also a video screen showing footage of the Apollo 11 Moon Landing, in addition to playing some recordings related to the recent Pluto space probe. 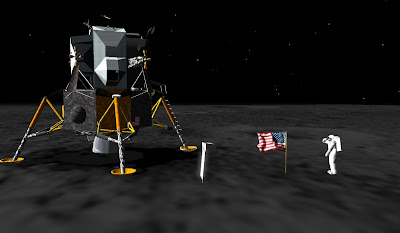 There was a build of the Moon Landing there, celebrating the "one small step" Neil Armstrong made, in addition to several other builds, including a rocket that would occasionally launch from the pavilion.

There was much space-related chatter among those in the group, at one point the question being posed what would come first, a moon base, a landing on Mars, or a permanent space colony? Each has it's challenges, that of a trip to Mars being cosmic rays being bad for brain tissue over time.

The National Space Society sim has a number of exhibits, and the group meets once a week on Monday at 3PM SL time.

Posted by Bixyl Shuftan at 7:00 AM