In the latest article from Hypergrid Business about Linden Lab's announcement for third party currency exchange businesses to shut down after the end of the month, it seems two petitions to keep them running have gotten an number of signatures. One at "savetheexchanges.com" at over 300, and a German language one at "Open Petition" at over 750, for a total as of the writing of this article of over 1050. 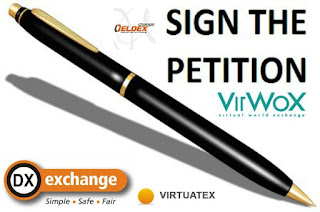 Linden Labs says it has many advantages to buy through Lindex, but the fact is, that they will ask you for your RL data, this is something many people in Second Life don’t feel comfortable doing.

We fear the problems, that will be caused by this, will have a great impact on Second Life and its residents. It will be of influence on shopkeepers, residents, and communities. Many SIM’s will have to close down, events, depending on Exchanges, cannot take place and shops with ATM’s and other possibilities to buy Linden Dollars will have to accept losses.

We need your help! We call on everyone to protest against these incomprehensible and damaging steps that Linden Labs will take from 1 August 2015! Help us to keep the Exchanges in Second Life!

The article described  various residents describing their problems with the upcoming exchanger ban.

“I have no other option than to buy Linden dollars on the Eldex and was shocked about what Linden Labs has done,” wrote Pfister Hammer Matthias from Vilshofen. “My preferred payment option is the Paysave card.”

“I pay through my bank,” wrote Günther Kaffrell from Fürth. “Not with plastic.”

“Unfortunately, the majority of the world’s Internet-enabled population still has neither PayPal nor credit cards nor MoneyBookers,” wrote Beate König from Heiligenhaus. “This poses a huge hurdle for new and current Second Life users.”

“I don’t want to put payment info on file, there are too many griefer tools in Second Life,” wrote “Havoxx Resident” from Berlin. “If they stop the Reseller Program, I’ll stop buying Lindens.”

“I have always used Podex which has provided great service for years,” wrote an anonymous user from Dillingen. “I want it to stay.”

“It is easier and faster to buy L$ with VirWoX,” wrote an anonymous user from Mülheim an der Ruhr. “An immediate transfer is possible.”

“Using PayPal, it takes me two weeks to get money into Second Life,” wrote Ralf Secker from Heilbronn.

Maria Korolov, who wrote the article, added in the comments afterwards, "Those who are using the third party exchanges use them because they have to. The thousand people who signed the petitions signed them for a reason. If they thought the exchanges were ripping them off, they'd go right back to the Lindex."

Unless Linden Lab can be persuaded to change it's mind, the third party currency exchangers will have to close on August 1.