The Relay in Second Life has a few traditions. Some are official, such as the opening and closing ceremonies and the awards given out. Others aren't part of the official program. This includes the "Flood Party."

In 2010 in the days after the Weekend Walk with people looking around the sims and holding impromptu parties, one of the track sim managers decided to have a little fun by raising the water level. People nearby noticed, headed over, and began swimming around in it. Word got around by word of mouth (or word of mouse), or people noticed the clump of green dots on the map, and headed over, whooping it up with inner tubes and swimmer AOs.

As this event isn't part of the official program, there's no set date. It could happen at any time today. And there's no guarantee that there will be one. Sometimes there are twists, such as the "drain party" last year as the Track already had a few flooded sims. But every year, there's been a flood party. So keep an eye on the Relay group chatter, and an occasional peek at the map over the RFL sims. 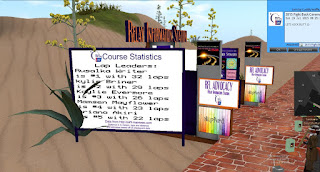 Some statistics about the Relay are available.  http://slrfl.maintree.com had the following

There were also three lists of whom completed at least one lap, and qualifying for recognition by the Relay for awards. On the first list, yours truly was counted as having walked "2.33" laps, and a Turtle Award. Twenty-one avatars were determined to do at least twenty laps, including Newser writer DrFran Babcock, and will get the "Roadrunner Award." But only twenty will get awards. The one whom did more than thirty was disqualified from getting any official recognition.

The date for the "Relay Wrap-Up" event was also released. It will be on Sunday August 16 from 9AM  to about 1PM SL time, with several more awards given out, including the Spirit of the Relay team and individual awards.