Second Life isn't featured in mainstream media as much as it used to be. So when it is, it's news. And when The virtual world was going to be mentioned on the "Dr. Phil" talk show, Linden Lab mentioned in on their blog. 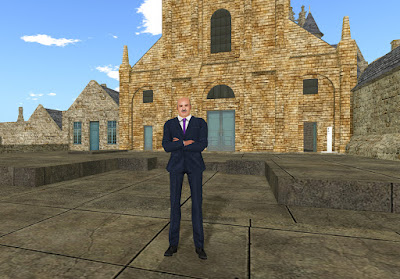 Mark your calendars and set your DVRs: an upcoming episode of the popular daytime talk show, Dr. Phil will feature Second Life and some comments from Linden Lab CEO Ebbe Altberg (Ebbe Linden in SL). The episode is slated to air on Tuesday, July 14, and you can find your local listings through the Dr. Phil website. Be sure to catch the very beginning of the show - you won’t want to miss Dr. Phil controlling his avatar live on what’s very likely the largest monitor Second Life has ever run on (40 feet wide!). 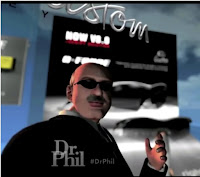 And in the first few minutes of the show, Dr. Phil used "the very popular Second Life" as an example of how far computer entertainment has gone from the early days of Pong and Pac Man, "I can literally create an entire world for myself and meet other people, or at least their avatars." The audience chuckled as they saw his avatar somersault in the air and fly, "Let me see you do *that*!" He showed clips of his avatar flying around, with and without a plane, riding a "Tron" lightcycle, walking the streets of 1920s Berlin, and shop in a virtual store.

But the show wasn't mainly about Second Life, but rather, the story about one 23 year old young man whom had a severe gaming addiction.

The episode is focused on helping a young man who is sadly struggling with a number of problems, including an addiction to playing an online game. He’s not a Second Life user, nor is Second Life presented on the show as a negative experience. Instead, it’s shown as an example of how far digital experiences have come from the days of Pac-Man and Pong, and Ebbe briefly speaks with Dr. Phil about some of the incredibly positive ways Second Life is being used by people around the world - from education to entrepreneurship, creative self-expression, and more. 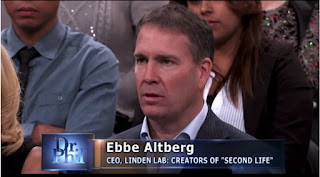 In addition to a number of Lindens who helped make it possible for Second Life to be included in the program, we’d like to give special thanks to Naughty Mole, Abnor Mole, Ancient Mole, Bat Mole, and Draxtor Despres for their help in creating Dr. Phil’s avatar and filming some inworld footage showing his explorations of Second Life.

Dr. Phil emphasized early on he wasn't slamming computer gaming in general, "I think they can be very good." But that it was the abuse of them that he was concerned about. Later in the show, he invited Ebbe Altberg (known inworld as Ebbe Linden), Linden Lab's CEO, whom was in the TV audience, a few moments to explain. 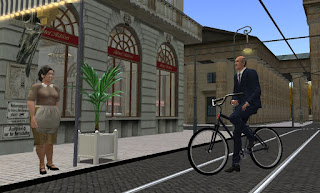 In her blog, Jo Yardley mentioned she had met the Dr. Phil avatar, concluding it was either him or someone from his TV show team. With the show not yet having been played, she had mixed feelings about Second Life being mentioned on his show, "I soon learned that Ebbe Altberg (AKA Ebbe Linden, CEO of Linden Lab) was also interviewed by Dr. Phil and Ebbe knows how to handle himself when talking to the media. ... And with its several million users, it could be a nice bit of PR for SL.The first videos the Dr. Phil show has put online so far seem to share with the world that not all games are bad and Second Life seems to get some positive attention, being described as the good side of gaming. Still, I can’t help but be a little worried about how our virtual world is going to be portrayed to the media, will we be part of the problem, or part of the solution?"

Strawberry Singh described in her own blog about how she, Draxtor Despress, and Marianne McCann helped out Dr, Phil in his flying. She would later watch the episode in question, an update her entry

I watched the show and live plurked it all at this link. Dr. Phil didn’t say anything negative about gaming, virtual worlds or Second Life. He just said that it’s the ‘abuse’ not the ‘use’ of gaming that is dangerous. He also had some other gamers on, after Ebbe, that talked about how they have full, successful real lives but still balance a healthy gaming lifestyle along with their real lives.

So it appears Second Life's portrayal was short but positive. Hopefully there will be more and longer exposures in the larger media soon.