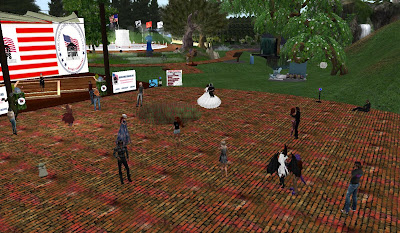 On Sunday June 26, Veterans Isle held it's monthly fundraising concert. Frets Nirvana and three other live performers played music for the crowd. The event was to raise money for the "Homes For Our Troops" charity.

Frets Nirvana: We are kicking off this July 4th week with our monthly benefit for Homes For Our Troops.  Come out and support our severely wounded veterans and enjoy a great lineup of performers. 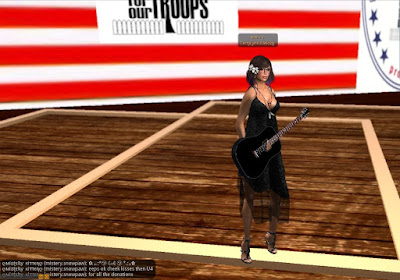 The musicians performed on stage with a flag background with a "Homes Four Our Troops" logo. Blindboink Parham was first, starting things up at 5 PM SL time. TerryLynn Melody started playing at 6 PM.
Frets himself took to the stage at 7PM. Finally at 8PM SL time, ReggieSunset Rookswood rounded things out. The donations were made into two kiosks, one on each side of the stage, which resembled overturned helmets.

The crowd was a little lighter than some events earlier in the year, possibly because this was of the Second Life Birthday events going on at the time. Still, there was quite a bit of fun going on. I was there, while TerryLynn was performing. Her performance was well complemented by those in the audience, one saying of a particularly moving tune, "Make me cry again TerryLynn and I am never speaking to you again." 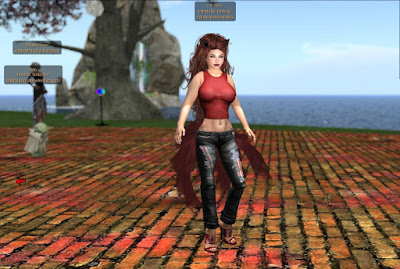 In the crowd, a neko named Mystery Kitten (Mystery Snowpaw) was livening things up with her antics, "Hehe spent my coffee money myself to buy (Lindens)." *keeps singing* "maybe I care scare my RL sons to give more to shut me up." When someone was going around in a Yoda avatar, "Hehe! Matthis has officially made my 8 yr old ... son's night. He loves Yoda (grin) and loves your singing (TerryLynn), he stole my headset." Eventually though, she had to go, "Well all my lovily fellow military bro and sissies and supported huggles till next time. Great to see everyone again. I must poof, RL, little one needs mommy now."

To learn more about the Homes For Our Troops visit https://www.hfotusa.org