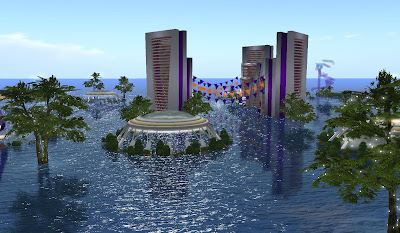 Yesterday evening, the sims of the RFL Activities sims of the Relay for Life were looking a little damp. The water level had risen a few feet, covering the walkways and ground. It was the time of the "Flood Party." 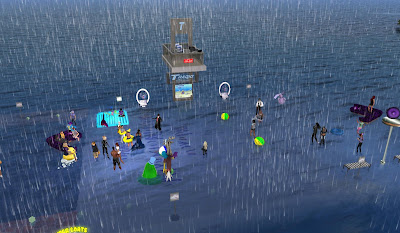 The flood party isn't an official Relay event, but started in 2010 a few days after the weekend walk when a sim manager rose the water level in his place on a whim, and people flocked over, spontaneously starting a party. Since then every year, there's been a flood party around midweek after the Relay Weekend. And this year was no exception, people gathering at a spot in the RFL Activities sims at 5PM SL time when it was announced the water level there was rising. 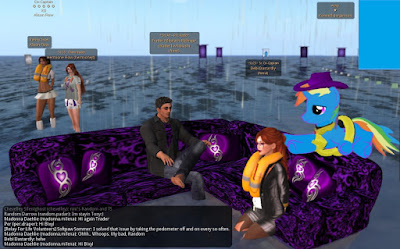 There were a number of team captains and other Relay personalities there, such as T1 Radio's Trader Whiplash, Debi Dastardly, and DJ Madonna. 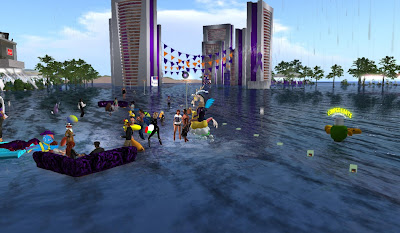 People danced in the shin-deep water, or floated on rafts and rested on the nearby purple couch. 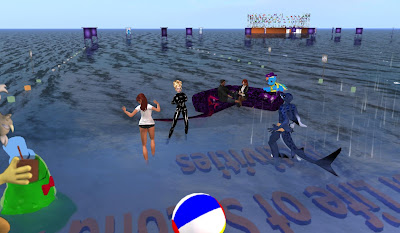 With a number of shark attacks making real-life news, a few got nervous when one showed up at the flood party. But he just joined in the dancing, shaking his fins.

After a few hours, the party thinned out as people went to bed, or went to explore the other sims on the track a little longer before the teardown the next day, Thursday. It was a fun flood party.