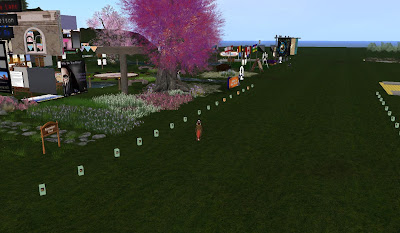 "All good things must come to an end." And so, the camps and track for last weekend's Relay Walk came down yesterday, Thursday July 23.

Just a reminder tomorrow is the day your builds should be torn down to prepare for the region return to Linden Labs. It is our practice to return items to builders by 9pm slt to ensure you don't lose your objects because when the regions are taken back, so are any remaining items! Lindens don't return them to you! Try to set aside time to gather up what you're most concerned about losing, if not all of your objects.  We are not responsible for lost  or missing items. 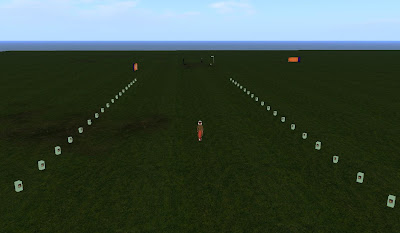 Camps had been coming down as soon as the night before. Throughout Thursday, the camps were taken down, and by early evening most were gone. Sections of track were taken up as well, with only the luminaria, and the occasional team sign of kiosk, to mark where they had been. 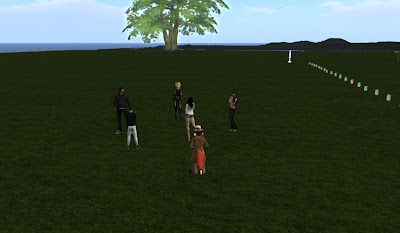 Across the track, some people were still around, looking at what was left, or recollecting the fun and activity the sims had held earlier, now a part of the Relay's past. 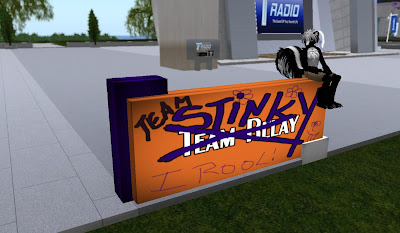 Not all was somber though. There was one bit of last minute fun when someone replaced the T1 Radio sign with the "Team Stinky" one from previous Relays when "Stinky the Skunk" was a motivation to raise more cash. 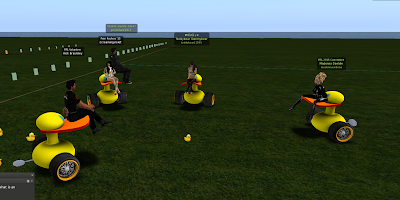 Someone else passed around a kind of wheeled duck, which people rode upon across part of the grounds.(picture by Screaming Violet) 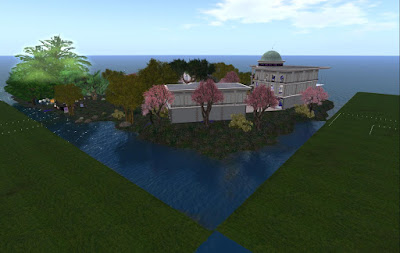 The one sim that in the end wasn't desolate was the American Cancer Society sim, part of the track  during the event, now returning to normal.

In the Relay chat were a number of comments, people looking back at the fun they had and looking forward to the future.

Thank you for making my first go as full captain of a team so awesome, everyone was so helpful and just plain out awesome!  Let's make the off-season and 2016 just as incredible.  Cancer knows no season--neither should we! 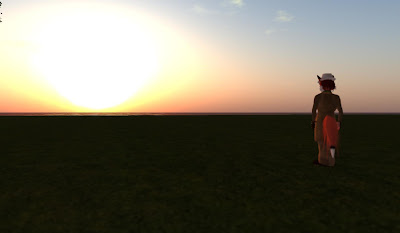 And so, one of Second Life's biggest yearly events truly comes to a close, with hundreds of participants. It's not the end of the Relay, the official close being Sunday August 16. And there will still be a few smaller Relay events in between, such as the Shadowmoon Dance tonight. But the Relay Walk was the high point of the season, with nothing quite like it.

For the Newser, it's also been an especially busy time, with our Fifth Anniversary, followed by the Second Life Birthday, and now the Relay. The busy time isn't over as there's still the Relay Walk article or two to do, along with a few other things that got postponed due to the event. The news never ends.