It was last year that following the official folding of the Passionate Redheads team, the Sunbeamer team was created to take it's place. Founded and led by Rita Mariner, and made up of residents of the Sunweaver Estates and friends of, it would go on to be the more successful of the two teams created by former Redheads, raising over 110,000 Lindens over the course of the 2013 Relay for Life season. 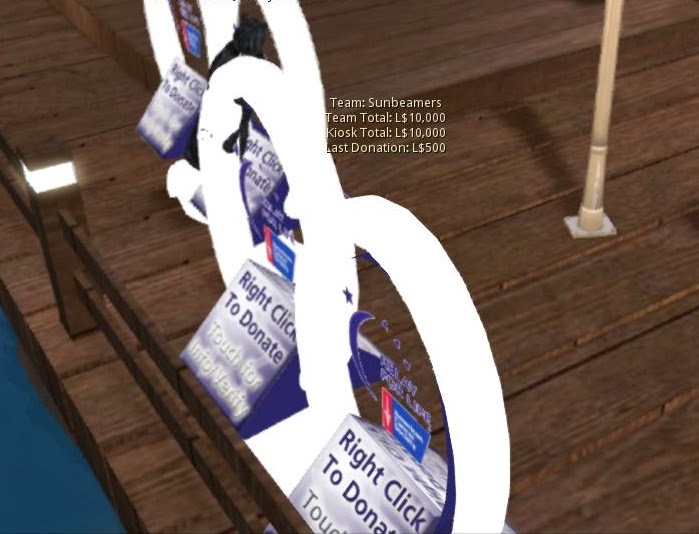 In the closing event of this weekend's Relay for Life season Kickoff event, held in the RFL Kickoff 2 sim temporarily set up near the American Cancer Society sim, teams were permitted to put up their fundraiser kiosks near the dance floor. This included the Sunbeamers, which over the course of a couple hours went from nothing to reaching ten thousand Lindens raised. This included two 1000L donations. This amount was the level needed to reach Bronze status.

Over the remainder of the party, the amount raised by the Sunbeamers would grow by another thousand to over 11,000. Rita Mariner announced that several people, notably some former Redheads, had messaged her that evening about joining the team.

Several other teams would also reach Bronze rank that night, including RFL Kidz of SL, Somersley Purple Curesaders, and Too Tough to Die.

The Steelhead Estates' Steelhead Salmons has also done well, having raised over 50,000 Lindens. "And we haven't even held an event yet," team leader Fuzzball Ortega announced over group chat, "Part of that was for a sponsorship on a T1 radio program, Relay Rap, meaning they'll plug Steelhead on the air, it'll also get read during Relay Weekend in July."

Currently the top ranking team is the Goreans For Life, which has already reached Platinum rank.

The Team Totals Page can be read here: http://relayforlifeofsecondlife.org/totals-page/ .
Posted by Bixyl Shuftan at 6:01 AM