It was Wednesday March 5th that Linden Labs announced the release of SL Go, it's new application which allows users to access Second Life via a tablet. Since then, a number of people have tried the product. Some like it, some have reservations.

Inara Pey gave a little history of the app on her blog. She stated the idea first came not from Linden Lab or then CEO Rod Humble, but cloud computing and gaming company Onlive and it's chairman Gary Lauder, "Lauder made his approach because third-person adventure games have been particularly successful for OnLive. As such, Second Life was seen as a logical choice for extending OnLive’s reach into more immersive environments  while at the same time potentially offering Linden Lab with a solution for providing SL to tablet devices and to low-end desktop and laptop systems." Among those working on it's development were Nick Barsetti, whom was "a former Linden Lab employee (Scout Linden) and a long-time Second Life resident who has been actively engaged ... for seven years, notably as a community leader in a Star Wars role-play group." The SL Go service is "provided entirely by OnLive," Inara felt this may have been one of the reasons for Linden Lab's controversial change in it's terms of service in regards to content creation. 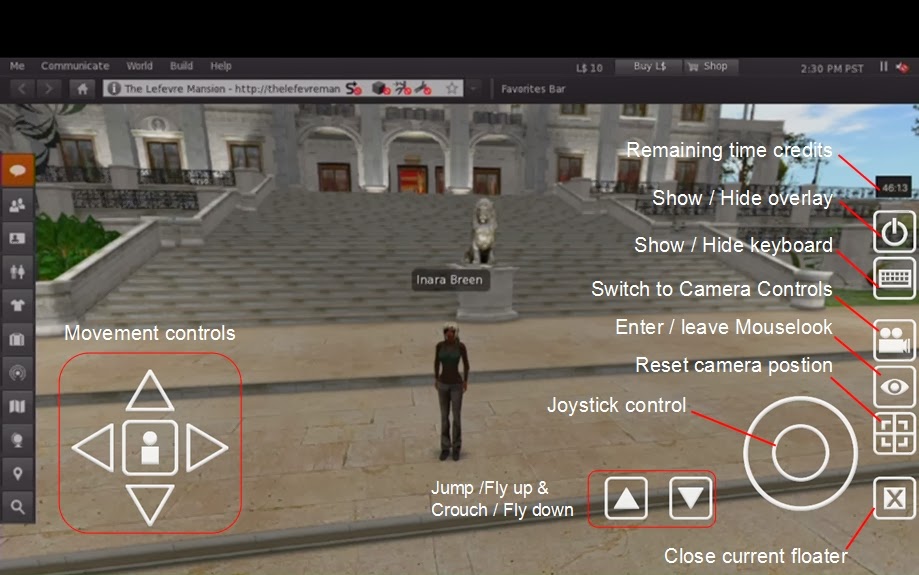 For now, SL Go is designed to run on tablets powered by Android, though plans are in the works to include the iPad. Of the display, "for convenience, the log-in fields are displayed at the top of the viewer’s splash screen. Tapping the Username field will display the tablet’s on-screen keyboard (note you can also use a suitable bluetooth keyboard as well), allowing you to enter your avatar name. Tap the Password field to enter your avatar’s account password, then tap Log In to log-in to SL. The Tablet overlay provides a means of carrying out routine interactions with the viewer – walking, turning, flying, jumping, camera movement and zoom, closing floaters, and so on."

"According to the supplied reviewer notes, double-tapping the avatar icon in the middle of the movement keys is supposed to enter flight mode; however, this consistently didn’t work for me, and I found flight could be enabled much as when using the viewer on a computer – tap and hold the Jump icon. Movement can be achieved either by using just the movement controls in the overlay (think arrow keys / WASD on a keyboard), or through a combination of using the 'up' key to walk forward and the joystick control to adjust your direction of travel. This takes a little getting used to, but isn’t that hard to grasp." 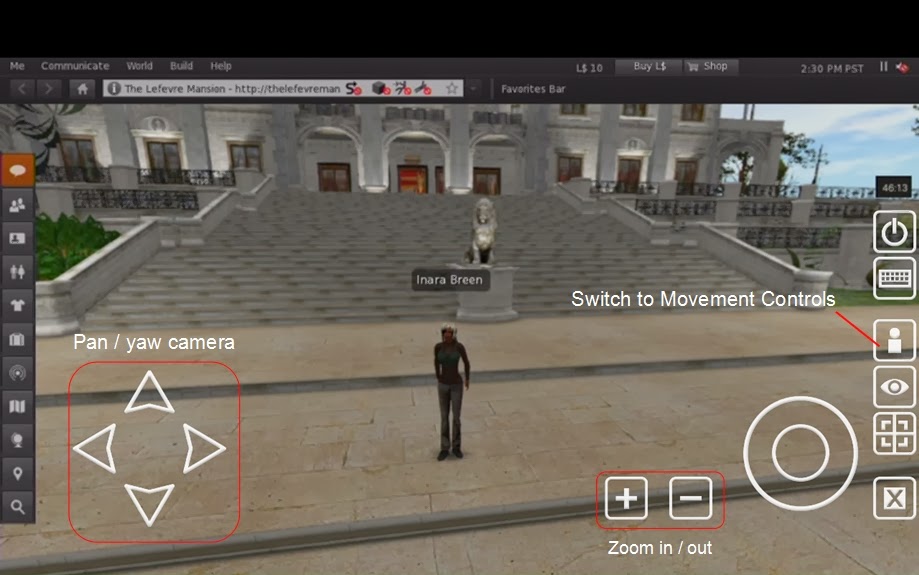 "Tapping the camera icon shifts the overlay to the camera options, All of the menus and toolbar buttons are accessible via tapping the tablet’s screen, although keyboard shortcuts are not enabled (even when using a separate keyboard). To assist with using the buttons and menus, pinch-zoom motions are fully supported, as is the ability to 'drag' the viewer across the tablet’s screen using a two finger gesture when zoomed-in. To help prevent the overlay getting in the way of things, you can tap the “Power” icon to collapse the overlay into a single icon; a second tap will expand it again."

Inara had some doubts about the app seeing widespread use, "I do wonder as to the potential impact SL Go will have on established users. From Nate Barsetti’s comments, the service appears to be aimed towards a niche set of uses (thus helping justify the cost). Frankly, for many users, there are alternatives when presented with most of those niche uses."

Draxtor was among those whom gave glowing reviews, "Seriously: the user-generated universe known as Second Life - beautifully rendered in the cloud - runs BETTER at times on an Android tablet than on my PC: I am thoroughly impressed ...  for SL professionals and enthusiastic residents this is a must IMHO: SL GO is not only running on 4G on the road but is instantly upgrading EVERY OLD machine in your household by using OnLive desktop app = pretty darn good!"

Hamlet Au also expressed enthusiasm, saying that he'd been using SL Go through being a tester was the reason he was reporting more about Second Life from in inworld perspective lately, "SL Go feels like a new era of Second Life ... here is the thing that makes all the difference for the world: SL Go works, and almost paradoxically, is the first platform to present Second Life as it really is. It eliminates almost all of the lag and load times most SL users have learned to accept, and presents to you a Second Life at its best, and purest form. If you couldn't see dynamic shadows, you can see them now; if your draw distance was small, it's now broadened to the sky. ... it's probably not ideal for new users (at least not in this early stage), but I do think it will bring many back to Second Life, to see the world as they've always wanted -- and as they've always wanted to share it with their friends -- but up to now, have never had the means."

Ciaran Laval thought the technology was good, but felt the high prices limited it's potential, "The pricing would get very expensive very quickly for anyone who used the service often, which means it’s unlikely to be used often by anyone. ... like tier, the SL Go pricing is a tad on the high side. Used infrequently there’s a lot of potential here but for a regular service, it’s a very expensive proposition."

Jo Yardley blogged that SL Go vastly improved the appearance of Second Life on her old Mac Laptop. But the high price bothered her, "Would you pay 3 bucks to go into SL for an hour? I would only consider doing that for emergencies, when I need to be inworld for a few minutes to fix something or kick a griefer in the unmentionables. Having said that, the OnLive experience is impressive, there is almost no lag, it loads a lot faster than most computers, it is mobile and it allows you to use your TV for SL. So although I am very impressed with SLGo, I fear that the costs may keep a lot of people from using it more than just occasionally."

For more comments, one can check the thread in the official general discussion forum: (Link). There's also a thread in the Second Life Universe forums: (link)