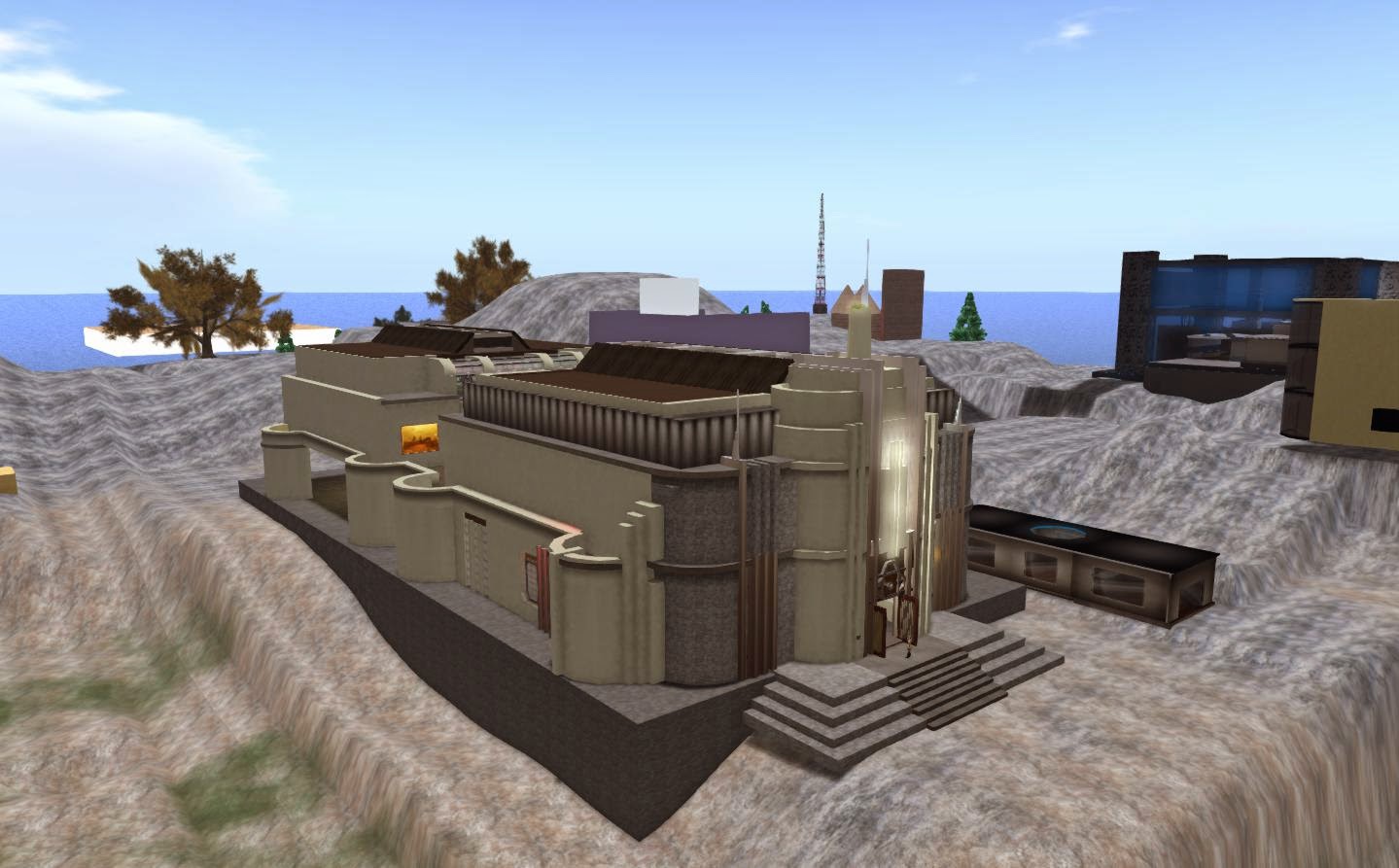 It was turning out to be a fairly ordinary day in mid-March for the Podex Exchange. Clients came in to exchange their various currencies for Lindens. St. Patricks Day would be in a couple days, and people were buying up green outfits and holiday decorations. Between customers, the tellers talked among themselves about events inworld. They talked about the Relay for Life starting up it's season of fundraising and events, and perhaps they themselves would visit a winter area while there was still time.

While they were chatting, all of a sudden they heard,  "Friends, Romans, countrymen ..."

Confused, the tellers drew their attention to the door. 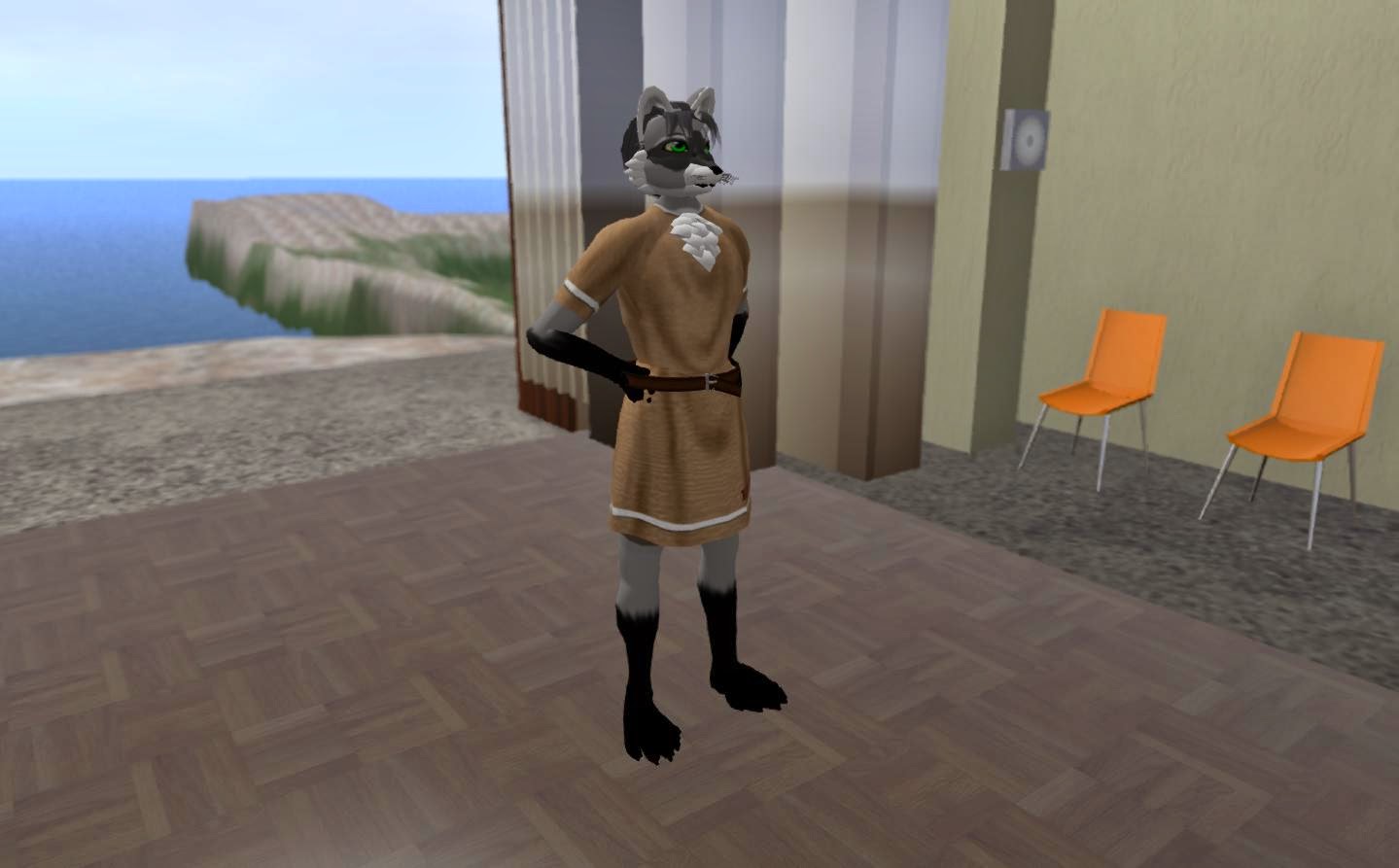 What they saw was a figure dressed up in of all things a toga, an outfit from ancient Roman times. It was held in place by a cord around the waist. The figure however, was a familiar-looking gray-furred character.

"Tis be the Ides of March," the figure spoke, "an' the Theater be in need of funds from it's account to play 'Ceasar.' So I'm here to collect a sum."

"You'll be collecting nothing but a call from the cops," a teller grinned, "Clumsy Cooper, we know it's you."

"Who be Clumsy? I be but a simple bard."

"I'll have to hand it to you," another teller spoke, "I was expecting you to pull a leprechaun gag. But even with you hiding your tail, we know it's you. Now just walk away and we'll pretend this never happened."

"All right, be that way!" the pantsless purloiner then pulled a dagger, "Hand over the Lindens and no one gets hurt!"

The tellers then laughed again, one saying, "You expect us to be scared by a knife? Besides, knowing you it's another cheap freebie. It won't cut a thing!"

"I'll show you!" the robber then took the blade, and ran  it into a magazine rack.

To his shock, the blade didn't do a thing to the rack. In fact, it had broken, the smaller piece falling onto the floor. "Um, I'll be on my way." 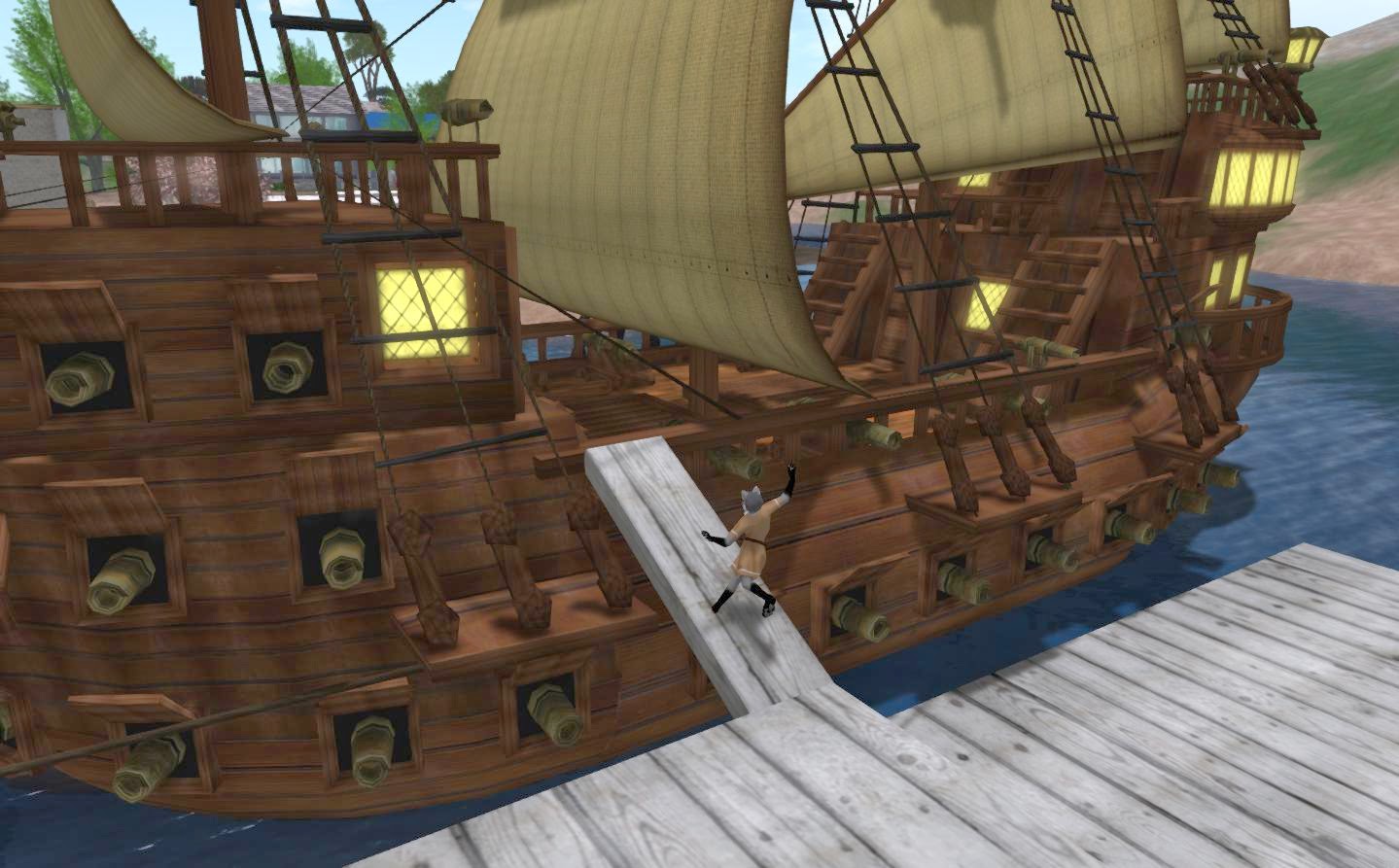 Now in a panic, the thief bolted out the door and ran off. Heading to a pier, he spied a couple of boats. He quickly scampered up the walkway of one.

"So, we have ourselves a stowaway?"

"Huh?" the would-be bandit turned, and saw a bunch of sailors in 18th century wear, looking much like they had stepped from a pirate movie. "Um, I must be on the wrong ship."

"Ye be right about that," one dressed like an officer with a sword by his side growled, "This ain't no luxury vessel, every bloke be workin' fer his daily hardtack. Now go grab a brush n' bucket. Ye be swabbin' the deck!"

The robber looked back where he had climbed up, and he saw a couple sailors pulling up the gangplank already. "Batten down th' hatches," the officer yelled, "We be sailin' off this instant!"

Cooper then looked down, dispirited. It was going to be a hard trip.

Back at the Podex Exchange, the Second Life Police Department was called, and they did an investigation. Not finding Clumsy Cooper, they issued a warrant for his arrest for attempted greifing.

But even if Cooper's scheme had worked, there was no way he could have gotten away with any ill-gotten gains. “All our exchanges are done through electronic transfer,” a teller later explained to the SLPD, “He wouldn’t have walked away with a single Linden.”