It was spring 2011 when yours truly volunteered himself for the first of three Relay for Life Passionate Redheads' "Bid Me Human" events. The results were 29,000 Lindens raised, and I ended up "tall, dark and handsome," but bald and tailless for about a month. But the Redheads would on with two other "Bid Me" events that year, the third one was when the Sunweaver chief Rita Mariner put herself on the line and raised nearly 75,000 Lindens, although she was stuck furless until just before the Relay Walk. These would help pave the way for the Redheads' most successful season.

Three years later, the Redheads have been retired, and the Sunbeamers have taken their place. To help give the team a jump start in their fundraising, Rita once again put herself on the line with a "Bid Me Male." The result was her going about as "Pepe Le Pew" until close to the end of the Relay season. So a few others have taken a step forward as a result. Popular DJ and writer Perri Prinz has offered herself for a "Bid Me Human," as has Brandi Tungsten Streusel the owner of "Brandi's Intimates" (aka "Brandi's Panties"). Skylark Lefavre, whom was in a "Bid Me Human" event last year that raised 30,000 Lindens, has volunteered for another "Bid Me." Hers will have options to have her stuck as a mouse or a skunk for a month. All three will have kiosks up at Cutlass for the option of making them either change or remain the same. 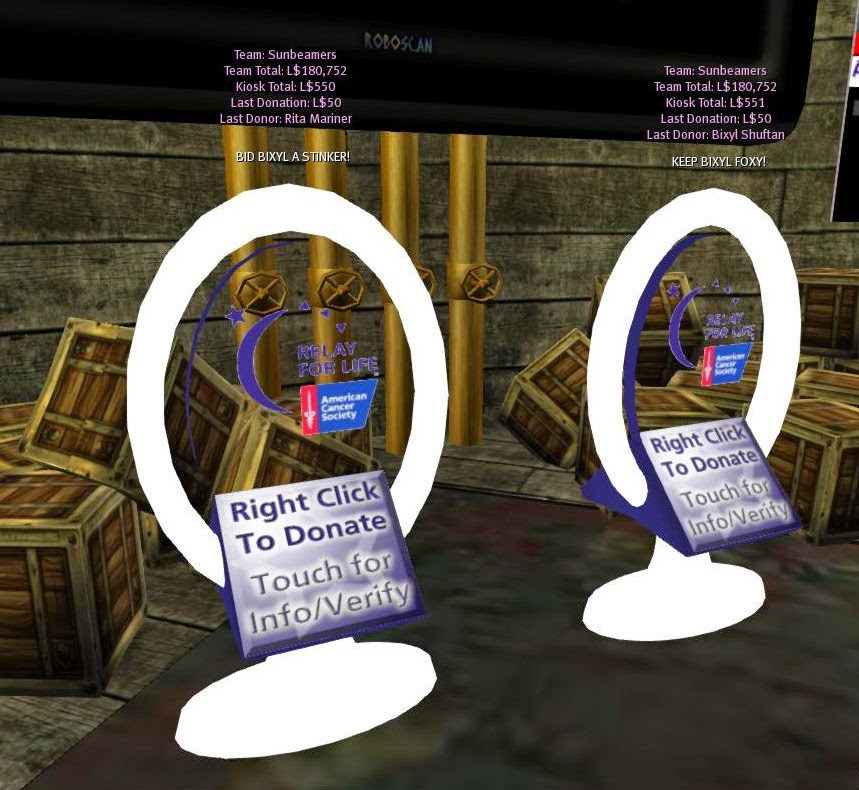 And then, there's me. Against my better judgement, I once again stuck my hide out to possibly take one for the team.

Another "Bid Me Human?" Not this time as it's still fresh in my mind, as well as some questions I had concerning that particular avatar have been answered. So I offered to be stuck as an anthro skunk avatar until the Relay Weekend Track exhibits have been taken down. Besides being a fellow stinker for Rita, and possibly Skylark, "Stinky the Skunk" is still around with the Relay, so this choice has a few reasons behind it, in addition to the mephit's infamous bio-weapon.

Two relay kiosks have been set up at Club Cutlass, one for bids to allow me to remain my foxy self. The other is for those whom think I need to raise more of a stink when delivering the news. Since the bidding started, the team total has gone  to over 180,000, and last I saw the two kiosks were running close.

The kiosks will remain up until  Club Cutlass' party on Saturday July 5th, when at 8PM their totals will be compared, and the higher one determining my look for the next month.