On Monday, at 5PM SL time, the Passionate Redheads Relay for Life group held an event not at one of the clubs from one of their groups, but at the SL Newser office building. Redhead Treminari Huet took part in a "Bid me Human" event, which was called "Bid Treminari Human."

Next to the Newser office, a temporary dance floor had been placed next to the building and in front of the fountain (which was acquired by SL Newser through another Relay event). Treminari also brought over a "Fox De-fluffer," which she would step into once the target amount was reached.

DJ Kryxia played the tunes for the event. Turnout was somewhat light at the beginning. As time went on, more showed up. Among the people there were Nydia Tungsten, Bain Finch, and Redhead leader Dusk Griswold. But still turnout remained smaller than at the previous Redhead "Bid Me" events this year. Treminari reasoned this late in the season, people were getting low on cash. Still, it wasn't long before the 3000 goal was reached, and Treminari stepped into the "De-fluffer." After a few seconds, it fell apart, and a dark-skinned ethnic avatar, with red hair of course, was in the place of Treminari's white Lusk vixen. 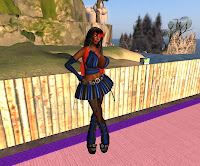 The event went on, and more money was added to the kiosk. When it came to an end, the total raised was 5,500. This and the amount raised during the 50s Weekend brought the total amount raised this year to 197,025 Lindens. There would be no Gold Level today, but there were still several weeks left in the Relay season. Treminari would be stuck as human for four days.

With July a few days away, the attention of the Passionate Redheads is turning to the end of the fundraising season: The Relay Weekend, also known as "The Walk." Before long, the builders will start work on the team's area, and on the weekend of July 14th and 15th, the Redheads will take their place among the other Relay teams for the main event.