Remember the popular computer game Civilization? Created by Sid Meier, and first sold in 1991, it was just a few years before a sequel was sold: Civilization 2, or Civ2 as it became known by fans. Starting with a single city, players researched technology and harvested resourced to build and expand their territory through conquest or development. Games could sometimes last a while, taking some weeks, maybe a month or two to play out before someone either conquered the world, or researched enough technology and industry to build a starship to be the first to reach Alpha Centauri. 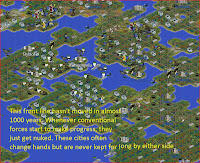 But how about a game lasting ten years?

In an Associated Press article by Derrik J. Lang, a player known as Lycerius posted on Reddit the details of his ten year campaign. In his game, it's the year 3991 with a 1700 year war that's left the planet scarred by numerous nuclear blasts, "The world is a hellish nightmare of suffering and devastation. There are 3 remaining super nations in the year 3991 A.D, each competing for the scant resources left on the planet after dozens of nuclear wars have rendered vast swaths of the world uninhabitable wastelands. … My goal for the next few years is to try and end the war and thus use the engineers to clear swamps and fallout so that farming may resume."

The Associated Press contacted Sid Meier about the game, to which he responded, "My first thought was, 'Wow! I can't believe anyone has been playing "Civ II" for that long,' ... It's been more than 15 years since we released that game, and I don't think any of us expected a decade-long game would come out of it."

As our real-life civilization has gone on, three more sequels, each with further changes to the game and graphics, have come out, in addition to a Facebook version .