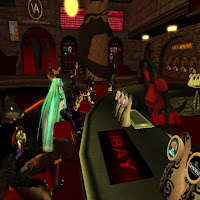 Since Grease Coakes first reported on the BaY club where he works part time, the place has been bought by a new owner, one whom has made some changes to the place. Most notably are some avatar animations from the "Vivid Animations" company, as well as the club having an overall, darker, look.

Read more in Extra.
Posted by Bixyl Shuftan at 6:01 AM