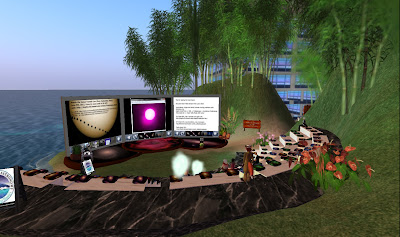 On Tuesday June 5th was a rare occurrence in space. For a brief time, Venus' orbit took it between the Earth and the Sun in what is called a Venus Transit. From Earth, it appeared to be a black spot against the Sun. For those whom couldn't see it in real life due to thick clouds or a lack of safe equipment, they could see live footage in some places in Second Life, such as the University of Hawaii. 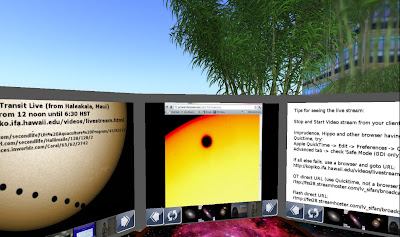 For some hours, there was footage of the planet's shadow causing a black dot in the image from the sun. Not everyone saw it from screens inworld, as there were also websites with live footage that were shared through instant messages and group chats.

Interest in science was alive and well that night.
Posted by Bixyl Shuftan at 6:00 AM