It's been two years since our newspaper began it's operations. Two years of covering the Grid. Both in real life and Second Life, many businesses starting up fail to last that long. But Second Life Newser has, and is still going strong.

In celebrating our success, there is also the matter of where we came from. All of Second Life Newser's original staff once worked at another paper, Second Life Newspaper, run by owner JamesT Juno and Editor Dana Vanmoer. Two of us signed on when the paper was about a year old, and by that time it had gone from a blog to an established online newspaper. When it celebrated it's second anniversary, it was at it's peak. Sadly, this level of success was not to last. Events in real life caught up with it's founder, and then the editor. And so, the decision was made to close the paper. 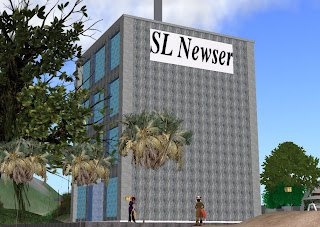 So what was there for the staff to do? We didn't want to stop writing and we didn't want the team to end. So we started anew, under a new name and with a new editor and owner in one person. I was happy with how things had been with James and Dana. But times change, and it was time to move forward on our own.

It's been a challenge, one of our first being a Second Life seemingly in crisis. If Second LIfe Newspaper spent it's first couple years covering a growing Grid in its prime, Second Life Newser spent it's first few months covering a Grid in crisis. One week after our founding, Linden Lab laid of a third of it's staff, including some people whom had won the affection of the residents (not an easy feat for a Linden). Then came the Emeraldgate mess with some of the staff behind the most popular viewer exposed as troublemakers. And then came the announcement of plans to merge the Teen Grid with the Main, which terrified some with visions of censorship and lawsuits.

Another challenge was having to prove ourselves once again. Although Dana's last act for SL Newspaper was to provide a link to our new paper, only a small fraction of its readers followed us. But some were willing to take a chance with us from the beginning. Nydia Tungsten and Ranchan Wiedman arranged for an office at the Sunweaver Estates free of charge, in addition to Book Island offering a store space. We made a little money through adverts. Then Jacek Shuftan of the Podex Exchange came forward to offer a sponsorship. Over a year later, Podex continues to happily sponsor the Newser. Plus The Steelhead Estates and more recently Mama Allpa have made cash sponsorship deals as well.

And our readership has grown. I've heard of numerous complements along the way, thanking us for delivering the news about major events such as the Relay for Life, memorials such as the Vietnam Wall and Twin Towers, art festivals such as Burn2, of the various people who've made the Grid a better place, and about issues such as the goings-on of Linden Lab. To these complements, we say thank you.

It's been a lot of work, but over time we've seen lot of new places and met a number of fascinating people, in the process making a number of new friends. By all means we're not perfect. So much goes on the Grid, it can't all be covered. And even if we're there, occasionally some breaking news comes in and we can't give the coverage we previously planned. And sadly a couple people from the team have had to drop out when events in real life required their full attention. Fortunately we've had new people coming in to join us.

And the future? As of the writing of this article, the Grid has lasted about nine years. Despite the blunders of Linden Lab, as well as the popularity of handheld devices like the iPhone and social media sites like Facebook, it has continued to hold it's own. It's safe to say that baring some unexpected catastrophe, it will be around for at least a few more.

In the meantime, we'll continue to keep writing about the people, places, and events, big and small, across this virtual world called Second Life for as long as we can. And by all means feel free to leave a comment, or send us an email.