Wednesday June 27 was the last day to see the SL9B, Second Life Ninth Birthday Exhibits. So went out on the field one last time to see what I had missed. I took a few freebie souvenirs, played a couple games, and of course saw a lot and took lots of pictures. Most of which will probably never see the light of this paper, though I'll probably add a few to my Flckr when things quiet down a little. 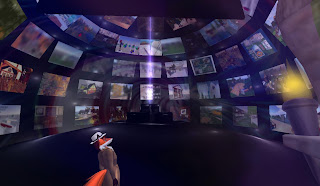 Why the Lindens refused to even so much as contribute a single sim, we can only speculate. There have been numerous suggestions from cutbacks due to the recession, worries about bad press due to drama, and of course "corporate ADD/Dilbert Symdrome." Or perhaps it was a little of these and more. As with so many other things, the Lab isn't talking, and many of us have come to the point it's futile to ask.

Bur what did happen was the residents of the Grid did not take the Lab's decision lying down. People came forward to offer resources, time, or both. We had twenty sims of land and water, with hundreds of exhibits constructed on them. Second Life Newser's own Gemma Cleanslate spent many hours as one of the staff in first organizing "The Birthday," and then guiding people around as they came.

Daniel Voyager had some interesting statistics about the event. The total number of visitors is still unknown, but there were over 300 in the first hour alone, despite it happening when much of the user base was at their real life jobs. The Cake Stage alone is believed to have gotten over 6000 visitors throughout the event. Besides the 20 sims, there were 357 exhibits, 318 performers and DJs, over 1200 pictures posted on the SL9B Flickr Community, and about 69,000 hits on the SL9B blog. Despite the Lab officially having nothing to do with the event, several stopped by, including Philip Linden himself.

It is true SL9B was not completely free of drama. There was a 9-11 memorial exhibition showing an airliner about to collide with the Twin Towers. The staff was approached by people whom felt while well intentioned, this wasn't the place for it. Chatting with KT Syakumi, she told me, "I think the people who made it were sincere in the sentiment behind it. … They built a new exhibit in it's place … and we featured it on a pic of the day. … We have rules to follow, but I'd rather work with someone to get their build to meet the rules rather than just delete it and boot them. … I understand that most Americans feel strongly about 9/11. But it's also very emotional. … Maybe there is a place for that, but not at a birthday celebration."

The only other example of drama was much simpler. Crap Mariner's version of the story was someone added a "pornographic" picture to his exhibit, and when asked to remove the picture in question, the result was a "ragequit," getting mad, removing the whole build, and up & leaving. But the empty space was soon filled with a replacement, Tateru Nino's "Second Life: The Game," an amusing parody of monopoly.

There were other things that went on and off the Grid that Second Life Newser hasn't or hasn't yet been able to report on. From a forecast of the Grid losing ten percent of its private sims in the following year, to Gez Linden leaving Linden Lab, to an early look at Linden Lab's text adventure game "Dio." South Korea also made the decision to "ban trade for commercial game items." Habbo Hotel is in trouble after a sex scandal. And of course there is the "Cloud Party" that's gotten some attention.

We'll do some work on these, don't worry. We just need a free moment after getting some rest.

I could go on and on about "The Birthday," and I'll try to write a little more on it in the near future. After that, maybe some pictures on my Flickr account. So I'll leave with these final words by Christopher Organiser.

"On behalf of the SL9B staff team, we would like thank each and every one of you for celebrating Second Life's 9th birthday with us this past week! It truly has been a blast. On June 23, 2003, Second Life was launched with only 16 sims. Now there are thousands! It was, indeed, disappointing to hear the news that Linden Labs would not be sponsoring SL9B this year; however, it is astonishing to see how the Community can join as a team and create a birthday party bigger than Linden Labs themselves can!

"Second Life is our home, real life getaway, a place for entertainment, hangouts, connecting, chatting, and loving one another as a whole Community where dreams come true and nothing is impossible. Thank you to the participants, staff, and performers for your dedication to make this celebration possible. Thank you to DreamSeekers Estates for sponsoring this occasion and providing the 20 sims! Let's all celebrate and party one last time at SL9B! Second Life's birthday only comes once a year, but our Community sticks together 24 hours a day for 365 days.

"We will see you all again next year when SL10B comes around! Good night, all, and have an enjoyable Second Life!"