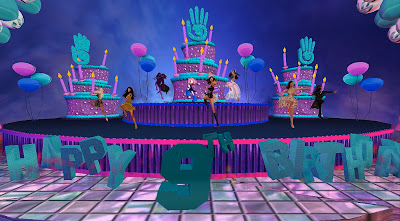 It was nine years ago today, June 23 2003, that Second Life was officially made open to the public. As others such as Daniel Voyager point out, "It seems so long ago." Most of us didn't get on until later in it's history, and new residents keep joining. One of the people I ran into at the SL Newser exhibit had only signed up with Second Life a couple days before. 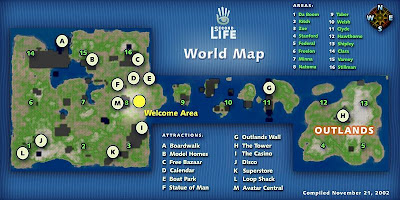 Second Life was a much different place back then. The virtual world was a lot smaller than the one today (link to map). And as the 2003 trailer below shows, it looked different too, the avatars and landscapes a bit simpler. There was no currency or the ability to teleport around. Linden Lab got money through the residents via a tax of how many prims a resident rezzed.

Second Life actually has some history before that. Linden Lab was founded in 1999 by Philip Rosedale (the future Philip Linden), and work began on what became known as "the Rig," which was given a limited release as an "alpha" in March 2002 as "Linden World."

It certainly looked a lot more gamelike back then with it's guns and grenades, and had a limited ecosystem and weather. Supposedly "The Rig" is still packed away somewhere in Linden Labs, "It was shoved in a box at some point and largely forgotten."

During the process of changing from this to start of the Grid as we know it, much of the staff wanted to keep the name "Linden World," but others convinced them a better name was needed, Robin Linden saying, "We believed a place name would give people a sense of destination, and possibly some added layer of meaning. And we thought a descriptive name would help people understand this new concept of a shared, 3D collaborative space." Proposed names with "Life" came up, leading to "Life2," and then "Second Life," which was ultimately the name chosen despite it supposedly "not popular among the Linden staff."

Since June 2003, the Grid slowly changed to Second Life as we know it. Later that year, Linden currency was introduced. Version 1.1.0 introduced telehubs, which residents could port around the Grid on. In 2004, the revenue model was changed to land tiers from property ownership. In late 2005, residents gained the ability to teleport to any place not blocked.

There have been a number of changes since then, Mesh being among the latest ones. And no doubt as Second Life goes on, there will continue to be more.