SL9B Ends, "We Made it the Best SL Birthday"

Late Sunday night, after a week of events, it was time for the Second Life Ninth Celebration to officially end.

Next up on the Cake Stage is THE SL9B GRAND FINALE WITH FIREWORKS BY BEWLL ORMEGA ACCOMPANIED BY DJ LAZ DRESLER FROM 11PM TIL MIDNIGHT!!! Join us at the Cake Stage as we celebrate Second Life's 9th Birthday with this outstanding finale!!! 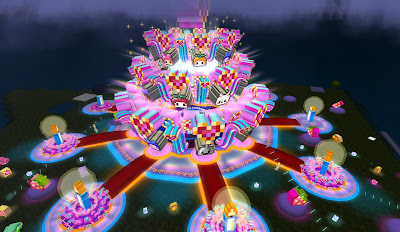 And so people from around the Grid gathered at the four-sim Cake Stage, for the final Event, "The last performance at SL9B is here!" 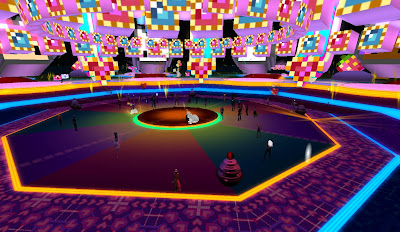 The event was attended by dozens of people, in many heights and types of avatars. Laz Dresler told everyone, "Thank you all so much for hanging with me tonight. I hope you had a great time." She played a number of songs, such as "You're Poison," and "Running Down a Dream." 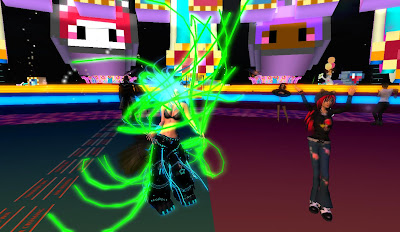 Among those at the party was the Cake stage creator, Japanese pop artist Mikati Slade. Her huge build got complements, "Mikati, I love your cake!" "Thank you!" Other compliments and cheers went around, "Thank you everyone for your hard work this year! You guys rocked!" "Awesome display and a perfect final for SL9B, Congratulations for a fantastic event!"

Someone remarked that for those who missed the event, a smaller show of fireworks would be going on "24/7" in the Celebrate sim. The sims themselves would remain up for a few more days so people could continue to see the exhibits, but would be coming down as soon as Wednesday.

Before the final event, people were thanking and congratulating one another for the event. Marianne McCann remarked during chat, "this event wasn't even supposed to happen. Instead, we made it the best SL birthday. I think we beat SL 3rd for the best title." "And Mari should know 'cause she's an old kid," someone seconded her. Crap Mariner after a few jokes told, "just wanted to thank everyone in here for giving it your all and then some. And I hope you got more back from it than you bled, sweated, and cried into it."

When someone asked what the record number of exhibits at an Second Life Birthday event was, KT Syakumi answered, "there are 357 exhibits, not counting the stages, infrastructure and events. Marianne McCann added, "I know we've not had 350± at any previous SL birthday."

There are numerous pictures taken of the exhibits, which can be seen in the Sl9B Flikr: http://www.flickr.com/groups/sl9b/pool/. Crap Mariner had several hundred up, "I'm not sure how many I've go snapshots of." Marianne McCann commented "I have been shooting a few things, but I know it's gonna be about impossible to see it all."

And so, the Second Life Ninth Birthday, the SL9B, probably the most discussed Birthday event on the Grid in years, is over.

"Thank you all for coming to SL9B! On behalf of the entire staff at SL9B, we hope you had a fun and memorable time celebrating Second Life's 9th birthday!"