Taking the Cake at Podex 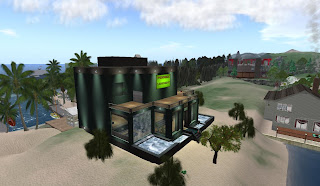 It was a late June day at the Podex Bank. Summer was here, and many of the customers were talking about getting a new surfboard or jetski with their Lindens, or a new swimsuit. One customer from Sunweavers talked about seeing an anthro mouse in a snakeskin bikini, which got a few chuckles from the staff. Considering snakes and regular mice, why would girl with mouse features be wearing something made out of snakeskin, especially a bikini?

Other things were discussed too. The jet airshow was mentioned, as was the science-fiction convention in a few days. But the real topic of conversation was "The Birthday," or SL9B. Life as they had known it had been organized nine years ago. While many residents didn't seem to care that much, others were very interested, heading on over to the exposition area to see the sights, play the games, get souvenirs, and just plain have fun. Some of the tellers had gone or were planning to go. Others didn't want to fight the crowds.

In the middle of this, someone entered the bank. He was dressed somewhat plainly, shorts and a T-shirt, but he looked like was wearing a cake for a hat! Upon a closer look though, it wasn't really a cake, but a cake hat. 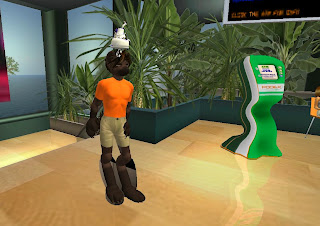 "Yes, I picked up a voucher for this place at the SL9B, but, just what are you again?"

"Well sir, we're an exchange service. We accept US Dollars, Euros, and several other currencies, and exchange them for Lindens."

"What if I have Lindens to trade for dollars?"

"Can't I just buy Lindens at, what's the place, Lindex?"

"We charge less than Lindex does."

The visitor looked over his shoulder and at a sign, "What's this about a Visa card?"

"We worked it out with Zachodni WBK, one of Poland's largest banks. Like any other Visa card or debt card, you can use it for both Internet transactions or withdraw cash from any ATM across the world. There are no fees for exchanging Lindens into your local currency, and your money will be on the card within the same day."

The man thought for a moment, "Well, I own a shop here, so I'll take one." 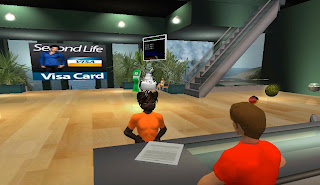 The customer and the clerk went over a few details, and the paperwork was taken care of, "You should be getting it in your mail soon."

"Oh, I run a party store. I sell lots of cakes," he grinned, "and getting to this birthday first thing they do is stick one on my head!"

The two laughed, and the customer gave his farewell and went on his way.