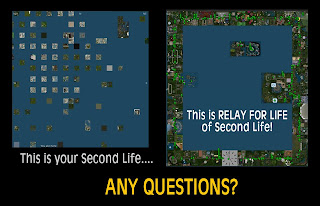 It was an eventful Relay for Life Weekend, with hundreds of avatars walking around the track, probably over 2,000, with millions of meters walked and thousands of dollars of dollars raised. Someone at the closing ceremonies stated that this was the most successful Relay Weekend ever. It's certainly been among the most successful seasons so far. About 330,000 US dollars has been raised so far this season, and It's not over yet.

At the Closing Ceremonies at 10AM Sunday July 15th, a number of awards were handed out, with the Knights of Avalon winning the best theme decorated. The Steelhead Salmons came in third. Two awards went to the Doctor Who Fans in SL team. Among who walked the most laps, Jesie Janick was first with 44.21. Due to SL's noted technical difficulties, a picture of the whole audience was unavailable. 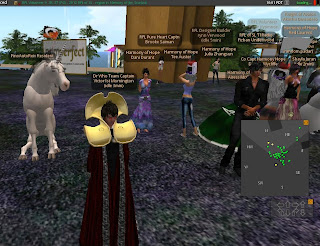 Although the Relay Weekend marks the end of the Relay for Life fundraising season, except for some teams holding one last party, the final event isn't until August with the "Wrap-Up Party," in which a few more awards will be handed out and the theme for next year announced.

For the Steelhead Salmons, the Relay was a resounding success with Platinum rank achieved after raising close to 550,000 Lindens ($2200 USD) , and two of their more noted members having a wedding that stole the show. For the Passionate Redheads, the season brought troubles behind the scenes, which resulted in less fundraising. But some individuals worked to keep the team going, notably Lomgren Smalls and Dusk Griswold, and the team succeeded in making gold rank and raising 300,000 ($1220 USD). Not as high as last year, but still more than most teams.

For now, the sims are still up until Friday, with teams asked to keep their builds up until Thursday, in which case they're to come down. Until then, there is much to see, with some activities still going on, such as the water fun at RFL Reflections, and various impromptu parties, including the "flood party."

Stay tuned for screenshots of the Relay Walk.

Read more at the RFL in SL page: http://rflofsl.intuitwebsites.com/index.html