Thursday July 19th was marked as the teardown day for the builds on the Relay for Life track. The sims would be coming down Friday or Saturday, "depending on what the Lab wants to do," and anything still on them might not be returned to their owners. And so, teams and individuals alike headed to their builds, but not to visit. 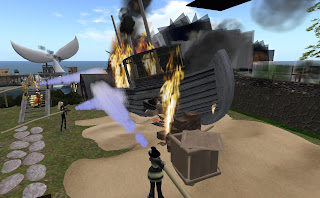 Sometimes the teardown was made into an event, having the build go down in a blaze of glory. It one case, it was literal. The builder of team "Armada Fights Back" had a kind of pirate base, of which the wooden structures were set afire. When word got around, it wasn't long before someone rezzed a fire truck, drove it over, and began hosing the fire. She was joined by DJ Madonna and one other, whom also turned hoses on the blaze. But not being a scripted fire, the hoses of course had no effect, "these flames must've been fed by pirate booze." Madonna was joked about being out-of-uniform when hosing the flames in her latex, "then again, it's waterproof." 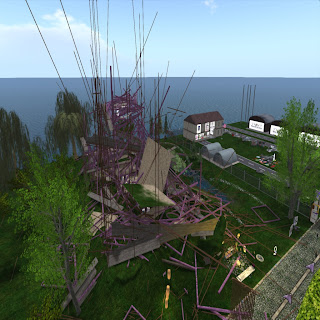 Team "Walking Tall for a Cure," whom were featured in the Newser a couple days ago in a cartoon, also made an event out of their exhibit's end. The place resembled the skeletal beams of a building in progress. Instead of having the place just simply vanish, the builder unlinked the prims and enabled physics, with the result being it collapsed over several seconds. And even after that, the beams kept settling and tumbling down, "they just kept falling." SL Newser didn't get to the event in time to see it happen, but Rastrolinkow Roffo provided some pictures (including the one to the left). The group cleaned up everything, "just like we found it," except for a single kiosk, and headed to Lollygagger Lane.

Other teams also made events out of their builds end. In other cases, the build simply came down. And sometimes there was a reminder left. When the "Dr Who Fans" domed city came down, Victor1st Mornington left a a sign, with a picture of a grinning man over pictures of the various Doctors from the BBC show. There was a bit of minor panic at one point when a rumor began floating around that the film of the track hadn't been done yet. Calm was restored when it was confirmed that the filming had been done on Wednesday. 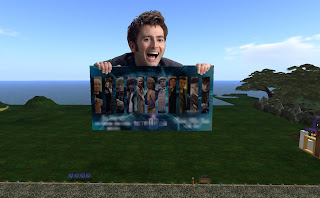 But as the evening wore on, some of the builds were still up. This included the Passionate Redheads build, of which Lomgren Smalls copied, but delayed taking down. Team "Relay Wizards for Spunky," along with Spunky Young, were partying late in the evening with their build still up. But one way or another, all will soon be gone.

For those wishing to see more, the official photographer of the Relay, IshtarAngel, has a collection of photographs sorted per event of the Relay season: Click Here. And of course there is the Flickr group of all Relay pictures: Here. There's also some TV footage available. The Relay for Life Telethon, a cooperation of Treet.tv, Metaverse Broadcasting, Pookymedia, and Metaworld Broadcasting, which got together to report on "news, interviews, and special events, such as a snail race." The recordings can still be seen at : http://www.livestream.com/virtualrfl .

The last official event, the "Wrap-Up Party" in which next year's theme will be unveiled, will be in August. For the Passionate Redheads, there will be a team meeting sometime in the near future to discuss this year's troubles and what direction and strategies they should take for next year.