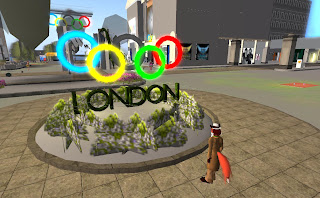 One of the more popular places in Second Life is London City area, which offers a number of events. And when the real London has a celebration, it's often reflected here, such as the Queen's Jubilee earlier in the year.

On Friday July 27, the 2012 Summer Olympics begin in the real life London. In London City, the place has been decorated with Olympic symbols, and a stage has been set up for Olympic themed events. The opening ceremonies will be covered live, and presumably live coverage will continue throughout the games to their closing on August 12.

Live coverage of the start of the London Olympics. Cash prize, the Parade and races for atheletes as they compete on the racetrack and Olympic sized swimming pool. Non-Stop party in the open air amphitheatre with top DJ's and acts. With competitions and prizes! 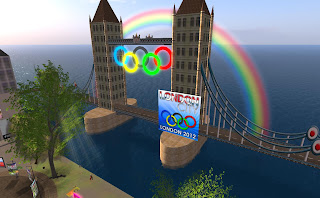 We hope you will join us on Friday, from 11am SLT (7pm UK) as we prepare ourselves for a month of fun activities, events, concerts and other special entertainment.

Is it true that London City will be holding an Olympic Egg'n'Spoon race? Of course.

Also check the article and screenshots at Daniel Voyager's Blog.
Posted by Bixyl Shuftan at 6:05 AM