Filmed by an "Abstract Artist/Jjccc Coronet," JJ Coronet in Second Life, this SL Video made at the Duran Duran area in Second Life will likely be seen by a larger audience outside the Grid, an audience of four billion. It very well may be seen as part of the opening ceremonies at the Olympic Games in London on Friday. Duran Duran will be performing at Hyde Park, and there are plans to have footage from this machinima on the screens behind them. If so, it'll be the largest exposure for Second Life video. 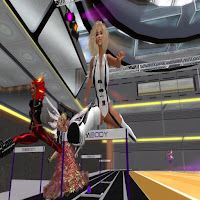 "The video I made for Duran Duran at the Olympics will be used for the opening gig seen by 4 billion people. How cool is that. I wonder if the servers can handle a huge influx of newbies on the 27th of July." ... "I spent the better part of the day there filming over 26 gigs of footage 3 hours worth of film that once edited down to 13 minutes gives you a small insight into what happen's at the Duran Duran Sim in Second Life."

Much could still go wrong. The footage could be cut, or not shown at all. But Duran Duran has used Second Life machinima before as part of their act, such as for their tour last year, "this time, we will present the Duran Duran Universe to the whole wide world."

See the video in largescreen Here, or in Youtube format Here.

Picture from Duran Duran in SL's Facebook Page.
Posted by Bixyl Shuftan at 6:00 AM