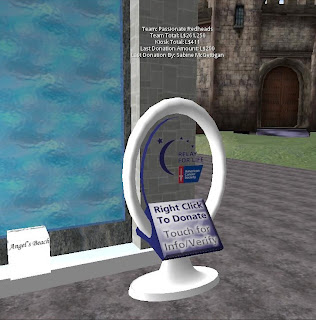 This weekend, tens of thousands of Lindens were raised by the Passionate Redheads Relay for Life team, mostly at a memorial service to the late caption of Team Relay for Hope Jeffry Pastorelli (more on the event later). On Monday June 2nd yesterday, the Redheads passed the 250,000 Linden Mark, and finally reached Gold rank.

Sabine McGettin announced the news to the group, "Our beautiful and Passionate Team reached Gold Status today! That means you all raised $1000 USD! We will have the Gold Banner at our campsite on July 14. I am ridiculously proud to be a part of this team. Thank you all for so much love, so much support, and so much passion! "

This year has been the most challenging ever for the Redheads, with some members facing real life challenges and a number of others taking leave from leadership positions or resigning. But they continued on, and passed a mark most Relay teams do not succeed in reaching.

As of now, the various teams are setting up camp at the Relay Weekend sims, and the Passionate Redheads will take their place among them. Battered, but still in the fight.