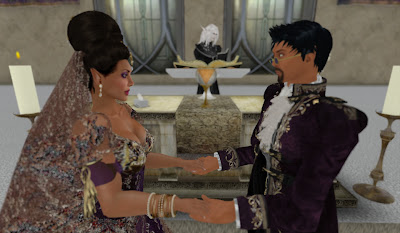 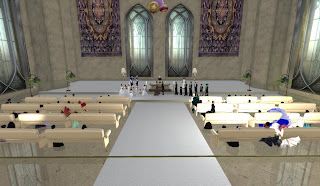 On the evening of Friday the 13th came what was seen as the event of the year for the Steelhead community, in addition to a major event to the Relay for Life voulenteers: the wedding of Marshal Fuzzball Ortega to Eugenia "Genie" Burton.

The event took place in a cathedral over the Steelhead Estates. Scheduled to take place at 6:30 PM, the ceremony was an elven one, conducted by community leader TotalLunar Eclipse. Tensai Hilra told there were 78 people there at one point. Lunar thought there was 80. Besides Steelhead, there were people there from the Relay volunteers, such as Trader1 Whiplash and Lomgren Smalls. Instead of rice, Steelhead trouts were thrown around in jest. 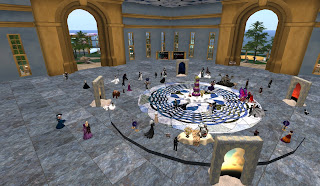 Following the ceremony, Fuzzball and Eugenia asked everyone to head to the RFL Volunteer sim for the reception. They later explained it was only fitting that it be held at the Relay, as it had such a big part of their getting together. And what a wedding it was with a djini cake in the middle, a roast pig, a chocolate fountain, "we had to send Mindy home before she took a bath in it."

And of course, there was lots of dancing. That is, when the dance machine was working. "Hokay, vhere did dot intan getz to?" asked Captain Veles Jägermonster (velesjaeger.munster), "Dhey dun letz me jomp un."

"I'm so happy that I'm teary!" Eugenia told everyone. That is, when she wasn't squealing her characteristic "Squeeee!" "I love my new name!" she told of her new surname of Ortega, squealing loudly when called "Mrs. Ortega."

The squeals spilled over into the RFL Volunteer group. One of the Passionate Redheads told me, "All day long, Relay for Life volunteers group has had people going 'SQUEEEEEEE!' When I got here this morning they were doing that. I just closed the group chat and somebody had just done it."

It was quite a wedding, although the honeymoon may have to wait. The day after the wedding would be the high point of the Relay season, the Relay for Life Walk. So many of the guests bowed out early to get some sleep before the 24 hour event.

"That was the most beautiful wedding!"