Remember the video JJ Coronet made in Second Life for use by Duran Duran at the Olympics? Well, while performing at Hyde Park in front of a live audience estimated to be 70,000, the band used parts of the footage (appears at about 3:20 in the video). While not part of the main performances at the opening ceremonies, "it likely showed up in lots of news coverage around the world." 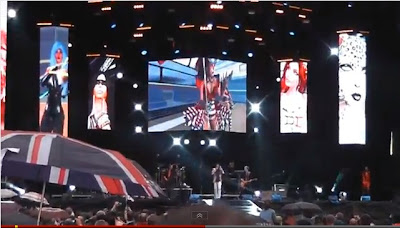 "The greatest gig ever Hyde Park in the VIP guest area Playing my video on screen in front of 70,000 people woohooo, Had a really great time big thanks to Chrissey and Gary for making it happen."

According to Hamlet Au, Coronet stated that some of the video will be in the Duran Duran CD "Diamonds in the Mind." He also told that while nothing's been confirmed yet, to expect more from the group involving Second Life content soon.

Source: New World Notes
Posted by Bixyl Shuftan at 6:00 AM