This special Giant Snail Races event by RacerX Gullwing last month on June 30th was the last of the Relay for Life races. Instead of a cross-country race, they did a scavenger hunt in Bay City. The snails were to go around the town looking for items on a list. There were a total of ten checkpoints. Among them was a donut shop. One can only imagine what passersby would be thinking of the huge shelled creatures stopping by the pastry place (looking for cops perhaps?).

Among the racers, no one got ten and only two got nine checkpoints: Tindallia Soothsayer and Safra Nitely. 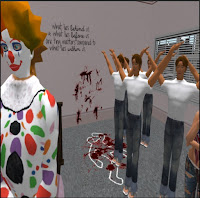 While there, I got into a chat with noted Bay City resident Marianne McCann. She was talking about a "Caledonian spy" who " landed at Bay City Municipal Airport and asked for asylum." But apparently her friend Ever Dreamscape had other designs for the defector, involving a clown suit and a crime scene for "interrogations." Someone stated the defector later sneaked away. Marianne commented, "Those of us in Bay City, of course, wish to continue to broker a peaceful co-existance with our... friends... in the somewhat backward nation of Caledon, but will not hesitate to keep our borders secure from any invasion force from the steam menace."

There has been no word of the incident from Caledon. When Vicerene Kamilah Hauptman was contacted, she would only admit to some "fun drama" going on between the two regions.

The Giant Snail Relay team has raised a total of 90,000 Lindens before the Relay Walk, still a Bronze-ranked team. But with their races they've gotten quite a bit of publicity.

*Addition* During the Relay Weekend, the team jumped to Silver status.