The Old Boss Pays a Visit 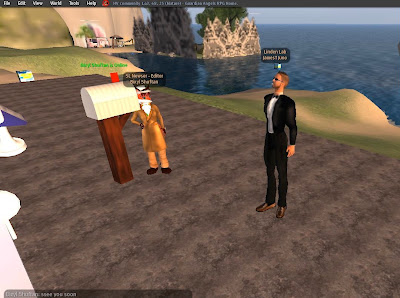 Longtime readers of SL Newser should recognize this man: JamesT Juno, the founder of Second Life Newspaper, and my onetime boss. Events in real life had put an end to his career here, and has been more or less on hiatus for over two years. I'd only seen him once before besides his appearance at SL Newspaper's goodbye party in June 2010.

James had dropped by to see how things were going on, with both Second Life and the newspaper that had taken up his old dream of covering the news on the Grid. He was happy to hear that not only was the paper continuing to deliver the news daily to an audience, but that multiple sponsors were willing to back it, and the paychecks of it's reporters.

He stuck around for a few minutes, then explained it was time for him to head on, and logged off. When he'll appear again, we don't know. But whatever he's doing, we wish him well.