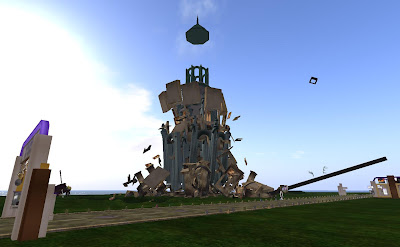 Friday July 20 was the day that the RFL track was officially on borrowed time. Despite the previous day being the Teardown, many builds were still up. Peeking in time to time, there was little activity, an individual here or there. At around 9PM SL time, I took another look, and saw a gathering at Steelhead. I headed there, and found several of the Steelhead Salmons team, including Tensai Hilra, who greeted me hello. And around them was wreckage.

The team was joining those ending their exhibit with a bang - literally. They had stored the original exhibit, and were re-erecting copies of the larger parts, such as buildings and towers. Once the individual prims were unlinked, physics took over, and the structure came down in a crash, bricks, springs, wall sections, scattering all over.

It wasn't just towers that were rezzed. At one point, a cloud of prims came down around me. I then found the ground around us littered with fish! Salmons to be exact, steelhead salmons, how the Steampunk community, and the Relay team, got it's name. At another point, simple two-prim sheep were raining down from the sky, "Ba-a-a-a-a-a!" One of the Steelheads wolfed out, and looked like the sight of all the sheep put him in shock, like his dream come true had materialized and couldn't believe his fortune at seeing all that mutton.

Besides the Steelheads, I saw a couple other people. They were using the time the track still had to run a few more laps. Their reasons, unknown. Maybe they were enjoying the sights while they were still up, or perhaps running laps for a late friend. They quickly came and went, their images fading away into the distance.

Eventually, it was time for us to part ways, and the Salmons logged off or headed back to Steelhead. 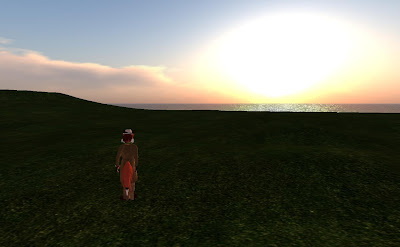 And so, one of Second Life's biggest yearly events truly comes to a close, with hundreds of participants, notably the Passionate Redheads of Sunweavers/HV Community/Angels Estates where the Newser has it's office and neighbors, and the Steelhead Salmons of Steelhead whom have been happily sponsoring the paper. Thank you for the complements of our coverage.

For the Newser, it's the end of a particularly busy time, starting in early June with our Second Anniversary, then the Second Life Ninth Birthday, then a couple important weddings at HV Community and Steelhead, and then the Relay for Life Walk. There were a few things in the news that coverage had to wait on, but we'll get to those. With the SLCC kaput, it'll be some time before our next event that gets the attention of the whole Grid.

The Relay Walk may be over, but the news never ends.