Daniel Voyager wrote on his blog about an Opensim event called OSG5B. 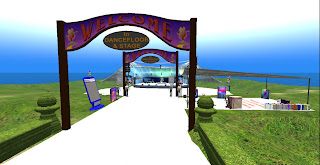 Osgrid will be celebrating it’s 5th birthday on Friday 20th July until Tuesday 24th July 2012, which is going to be awesome and bigger than ever before. This is another major milestone for Osgrid to reach it’s 5th birthday. OSG5B has 7 regions dedicated to the birthday with OSG5B exhibits to visit and there will be many live music performances.


Opensim got some discussion when it first came out, and since then the various Opensim-based grids such as Inworldz and Spot3D get some occasional discussion. A few designers, such as M&M's 10 Gooson have set up shop there, and small communities have sprung up in these worlds. While some places, such as Raglan, have set up satellite locations, only a very few have left Second Life for good in favor of Opensim, usually out of frustration with Linden Lab and its policies. Others go back and forth. I've talked to more than one person who's expressed the opinion they made a place there in case one day Linden Lab finally drives Second Life into the ground.

I occasionally see an Opensim advocate speaking out in the comment section after an article about Linden Lab/Second Life troubles, insisting about the "inevitability" of Second Life's fall and Opensim taking its place. But after five years, there is little sign of this happening. Despite Linden Lab's blunders, they've kept the market on virtual worlds. More often then not, when my friends go somewhere other than Second Life, it's to World of Warcraft or more recently Minecraft.

Still, quite a bit of work has been done in these places. And Second Life residents can take heart that if one day their Grid should up and vanish, there are other places one can make their virtual homes in.