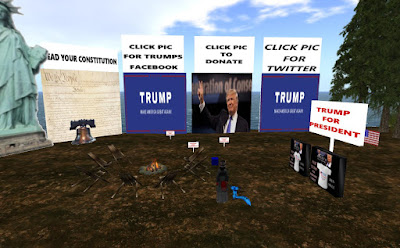 In 2008, when Second Life was still the darling of tech and mainstream media, the US Presidential election found it's way into the Grid with the supporters of various candidates during the primaries setting up "headquarters" where people could pick up shirts. At the US Capitol Hill building, as well as Cafe Wellstone for Democratic supporters and the Straight Talk Cafe for the Republicans, people could listen in and discuss the debates, and on Election Night people gathered to watch the results of the polls state by state, the Democrats cheering their victory and the Republicans resolving to win next time. Four years later, the attention of real life media had gone elsewhere, and only one of the two political parties had to choose a candidate, so there was less political activity on the Grid, with fewer supporters, and no neutral location as Capitol Hill was gone, but more retoric thrown against each other.

With the 2016 campaign under way, so far only a handful of candidates have stepped up to campaign for the Democratic nomination to replace the outgoing President, while the Republicans have a long list. A search for locations for the two leading Dems on the Grid revealed nothing, though the current leader in the polls for the Reps did. Typing in "Trump" revealed two locations. One was the "Donald Trump Campaign" at Portland Main (218,231, 11), where one could pick up a shirt and check a campaign Facebook page. 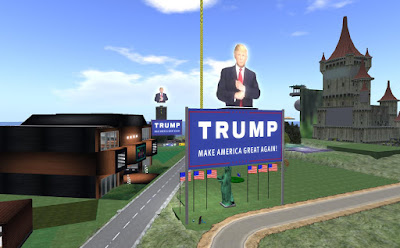 Another location was "Donald Trump For America," Seokcheon (164,251, 49), on the Second Life mainland, where there were two prominent signs on the road.

The election is still well over a year away, so a *lot* can change. But one thing is certain, supporters of candidates will be making their voice heard.