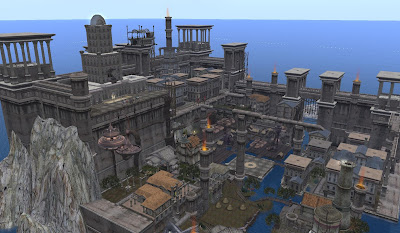 A few years ago in January 2012, Gemma Cleanslate wrote about Forgotten City. After almost four years, co-owner Mandy Marseille had some sad news posted on the SL Universe forums: the sim will be coming down. "After like 4 or 5 years of existence, we are going to shut down Forgotten City." 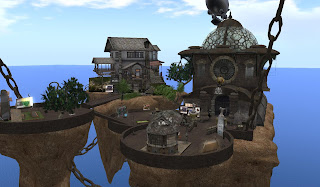 In the forum post, she wrote that the idea for the sim's current form was, "a semi-living city to those who wanted to have a bit more lively inworld living. Unfortunately this make-life-in-the-city project was half done: lamplighter and janitor automatons plus a scheduled boat service was installed, but the city's mechanical population never came to life. As years passed we had the luck of providing housing to some very nice and talented renters, also hosted random RPs (at least we stumbled upon a few), moreover we had free super fun games on the many layers of the sim (Btw these games are still available (for free ofc) until the sim's closing).

"But as of now the income from our inworld store dwindled enough so that the sim is hardly able to maintain itself ... and thus we need to relocate the store to a 4k or so parcel and leave the rest behind to be forgotten (nomen est omen)." 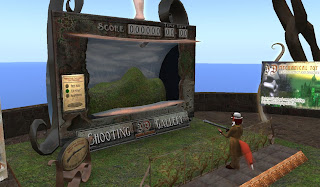 A notecard at the entrance point,  Forgotten City (211, 77, 103), stated there wasn't much time as the end date was "around September 15," which is tomorrow. There are a few things do do there, an "alien shooting game," a shooting gallery, a racetrack with cars, and a winter park with a ski slope. Taking a look for myself, the shooting gallery and ski slope seemed a little bugged. The race cars and alien shooter seemed fine though.

"Thanks for the help and for everyone who came and visit (and maybe even bought something)."