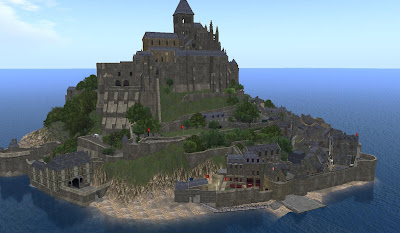 Another noted sim in Second Life will soon be closing. Moeka Kohime, the builder and owner of Mont Saint Michel, which Becky Shamen listed as one of the top ten places to visit on the Grid, announced on her Flickr page that the location would be going away for "economic" reasons.

Going about the place, it was very well detailed. Much like the real-life Mont Saint Michael, which has served as an abbey, fortress, and prison, it has been a popular attraction with residents frequently dropping by. Many have left some of their screenshots on the location's  Flickr page where various residents have posted over a hundred pictures of the location.

The island also has an old blog with a few pictures, but has not been updated in years.

Hat tip: Hamlet Au
Posted by Bixyl Shuftan at 6:00 AM