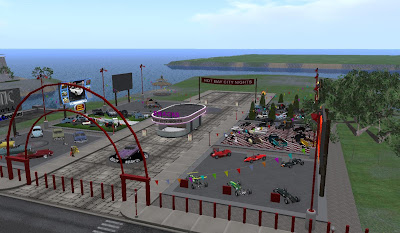 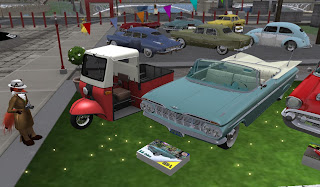 For the fourth year in a row, Bay City is holding it's "Hot Bay City Nights" event. Described in the press release as "an event celebrating Bay City's mid-century theme as well as its large network of roads," a number of inworld automakers are showcasing vintage models there.

Dropping by the car show North Channel sim, there were a number of vehicles up for display. Besides the classic Cadillac of there era, there are other cars available, from trucks, to racers, to the humble Volkswagen, and others. There are also a few freebies up for people to take, such as a go-cart. 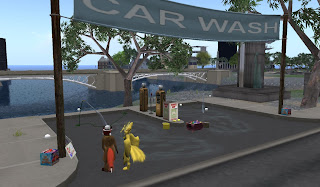 There's a car wash area nearby, for those who want to pose and take a picture of themselves giving their wheels a little care on the chrome. And on Sunday Sept. 20th, the last day of the event, the "Miss Bay City" Beauty Pageant takes place.

"Hot Bay City Nights" raises money for the "Child's Play" charity, "a charity that provides toys and games for children in hospitals around the world."

For more information on the event, IM Marianne McCann.

A video of the car show was made by Hexapoda.