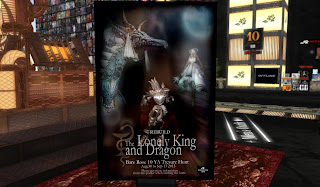 In an era where shoppers in Second Life can always make their purchases from Marketplace, Bare Rose may seem to some like a relic from the past. For those whom haven't seen it,' it's a huge clothing store that takes up a whole sim, with towers of clothing kiosks that stand many dozens of meters in the air. While the pictures may take some time to rezz and come into focus, once they do browsing through them can be faster than going through links on Marketplace. As the outfits are transferable, many are bought as gifts for partners and friends. As the store has used furs as well as normal human avatars as models, the place gets it's share of tailed customers. 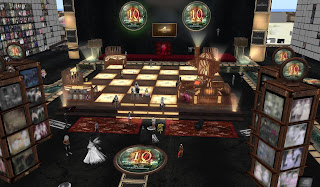 Recently, the place celebrated it's tenth anniversary. So what does the biggest clothing store in Second Life do to celebrate such a milestone: have a shopping hunt:

Bare Rose celebrates its 10th year in Second Life with an elaborate story-based treasure hunt, which is only open until Sep. 13. As you arrive, click the poster to get full details and instructions. You will find more information on the story and a hint for each chapter. Prizes include armor and a full dragon avatar! 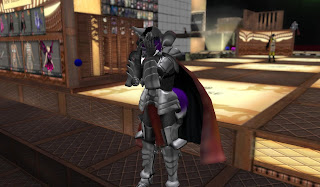 The hunt ended a few days ago on the 13th, but while it was up, a notecard with instructions and the start of the story could be picked up. The story describes the reader as waking up to a throne room with a king, and the first landmark led to a throne room, and looking around one would eventually find a free suit of armor fit for a king, with a crown included, and another landmark to the next part of the story.