Sunday September 20 was the last day of Bay City's "Hot Bay City Nights" event. The main feature of the occasion was the vintage auto show at North Channel, but on Sunday was the "Miss Bay City" pageant, in which Belle Mistwallow was voted the winner. Afterwards, Second Life Newser had a few words with Marianne McCann, one of the community's leading residents. 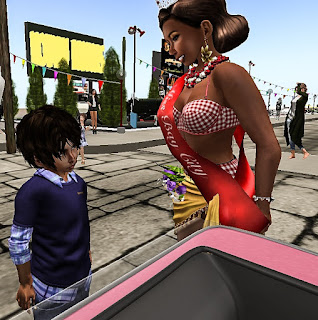 I asked if the pageant's current and last year's winner had anything to say. Marianne answered, "Sadly, last year's winner, Uccello Poultry, who set a new bar for Miss Bay City over the year of her reign, was unable to be at the event this time due to a first life entanglement. She did provide notes for the new Miss Bay City, and will likely be able to speak about that. Belle did speak at the event, briefly, thanking the audience, the judges, and especially her family. Many of them came to root for her. Belle Mistwallow was one of five contestants. Others were Ayame Kintsugi (Zombiegal Resident), Micha (MichaMoz Resident), Cinder Roxley, and Wellington Beam."

"The winner, in addition to the title, sash, and tiara received a 1961 Panther from 2Zoetic Motors. ADudeNamed Anthony, owner of 2Zoetic was one of the judges. Kinnaird (Resident), Marianne McCann, and Evola Courtois were the other judges."

"For me personally, I want to thank all the Residents of Bay City and elsewhere in Second Life who helped make the event possible. I was ill during the initial set up, and so many stepped in to make it possible."

Bay City is one of Second Life's more noted area and communities. It has the distinction of a close relationship with Linden Lab's Department of Public Works as the group designed the city, and has several events a year that attract people from across the Grid.